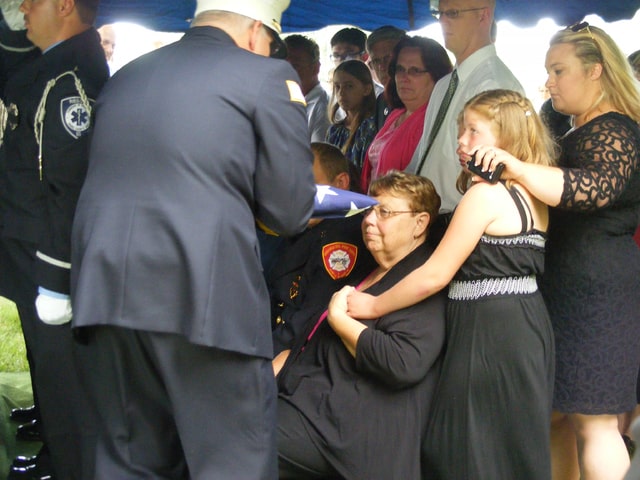 GREENVILLE — Public servant Mark A. Dotson was laid to rest Wednesday in Greenville Union Cemetery and mourners are already missing him.

The 61-year-old died June 17 at Miami Valley Hospital in Dayton after a brief illness.

“He loved his family, kids, grandkids and liked to help people no matter what it was or who it was,” wife Joyce said. “My two cousins, Lori and Judy are widows and he helped them. He was a good handyman.”

She also noted that her husband of nearly 31 years enjoyed playing golf.

“He played golf on Thursdays, starting last year, and loved to do that,” she said. “One of the guys told me he might not be very accurate but he sure could hit that ball.”

The Dotsons, she said, loved to travel when they could.

“We did that two or three times a year, and we’d do a vacation even if it was three or four days,” Joyce said. “He liked Pigeon Forge, but we vacationed in Michigan for years and years. He loved the outdoors.”

A couple of other loves of his, she said, were his four granddaughters and riding his yellow Honda Goldwing.

“He got the nickname Bumble Bee from riding it,” she said.

The Dotsons met through squad.

“I ran squad from the time it started,” she said. “I was in the initial class in 1974 and ran 10 years. Mark was on it for 38 years and he started as a volunteer. I got to know him through that. That’s what I liked about him because we had that in common. We both were adamant about squad and really liked it. Then one thing led to another. He was fun to be around.”

Her brother, David Orrison, had this to say about his brother-in-law, “We’ve always had a great time together. We went on bike trips together. He always went to Eldora with me. He was pretty much a brother than a brother-in-law. We’d run for each other.”

One of the funniest memories Orrison has of Dotson was from an incident at Eldora Speedway.

“I’ve known Mark since 1988,” said Greenville Fire Chief Mark Wolf. “Above all, he was dedicated to the community and Greenville Township Rescue. Most recently, I worked with him as part of the Darke County Haz-Mat Team Advisory Committee. He was very active with us and, absolutely, he was helpful. He’s going to be missed.”

“Mark was a wonderful man,” remarked Chris Norris. “I started running with him and Joyce in 1981 so I knew them a long, long time. He was a great guy and heck of a paramedic. I learned so much from him. He was always there for me in my time of need with the passing of Leroy Murphy and Jeff Keaser [two other public servants]. He was quite an individual.”

Darke County Commissioner Mike Stegall had this to say about Dotson: “We first met back when I was township trustee an he was on the squad. When I was campaigning, I went to his house and he came to the door. ‘So you want to be my boss,’ he asked. He was assistant chief of the rescue squad, and I said, ‘Yes, l’d like to be your boss.’ In the first month, I realized what a good guy he was. He was an all-around good guy. He was conscientious and had a calm demeanor. Last year, 20 golfers at Turtle Creek got Mark to go with us to play golf in Alabama. I never saw anybody have so much fun but we all had fun. All of us enjoyed having him around. He was a just a good man.”

Doug Wright, who hired Dotson at the Union City, Ohio Fire/Rescue years ago, commented, “He started in the service under me and trained there in Union City. I had known him and his family my entire life. He was the kind of person who was very dependable, always volunteering his time. If somebody wanted off and needed someone to cover them, he was always one of the first ones to step up to the plate. He would take that person’s time schedule. The firefighters and EMS people always got along with him, especially when he was promoted to lieutenant in charge of the EMS. He worked out problems they had and the schedules they had to work. He was great guy to get along with. If somebody had a problem and didn’t know how to solve it, Mark stepped up to the plate and solved them. He always tried to help.”

“We were at a structure fire one time and he was in there giving everything he had to put the fire out,” Wright recalled. “It was hot out and he came out, took his coat and helmet off, went over and sat down beneath a shade tree, took a drink of a bottle of water and got his pipe out and started smoking. I asked him why he was doing that after he just got out of the smoke and he said, ‘There is nothing better than good old pipe smoke.”

Wright concluded, “He was a great guy. I’m honored to drive the engine that will be carrying his body [to the cemetery].”

This came from the American Red Cross Northern Miami Valley, “Mark was a wonderful board member, a dedicated husband and son and a true pillar of our community. His passion for excellence, his ready smile and his commitment to the safety of our county will always be remembered. Our thoughts and hugs go out to the many who will miss him.”

“Mark and I volunteered together for awhile then in the ’80s,” said Mick Maher, former EMS administrator. “Then, he became a part of the full-time at Greenville Area Emergency Rescue Service (GAERS). He was very dedicated to his profession and the community. He became a paramedic and wanted to get his instructor’s license to teach basic EMT classes. He was a good public servant.”

“Mark was dedicated from the very beginning,” Maher said. “When he started with the National Guard in Greenville, his first sergeant gave Mark the best comment. ‘He’s a good soldier.’ That would wrap up things.”

Ralph Hurd Sr. spent a lot of time with Dotson, especially at Eldora.

“He was an all right guy,” Hurd said. “I took him up to Eldora in my push truck. He liked going up there. Dave Orrison, his brother-in-law, took the wrecker up the to the late models and Mark came around and asked if he could come up in the push truck with me. I took him quite a few times. He enjoyed it. and I took his father-in-law, Jerry Orrison, up to the track too. Recently when they had that three-night week, he went up there with me every night and on the race lineup was the name Mark Dotson. I told him, ‘I didn’t know you drove cars.’ A little later on the name ended up on the big screen on top of the hill. Mark got out of the truck and took a picture of it with his camera. I said, ‘I assume you will show that to your brother-in-law’ but his brother-in-law saw it and also took a photo. I am going to miss taking him up there. I worked with his parents at Westinghouse years ago. I just knew the parents at the time. It was back in 1955.”

“Mark was a fantastic public servant,” said Greenville Police Chief Dennis Butts. “He was a true pleasure to be around. It is a great loss to the Darke County area to not have him in his position. It was kind of a shock.”

“I got acquainted with Mark in 1976,” remarked Gary Zechar. “He was a very dedicated person to rescue back before he was a paramedic. He did everything 1o0 percent and was a very likeable fellow. I was glad to see he worked his way up the squad to assistant chief. Last year, he started to play golf and we went on a golf trip. We all had fun and he totally enjoyed it. He was looking forward to going this November also. So we’re going to miss him in more than one way.”

Darke County Sheriff Toby L. Spencer had this to say, “Another sad day in Darke County as we say goodbye to a great man and public servant! Mark Dotson, it was certainly all my honor and privilege to work alongside you, and more importantly call you my friend! God speed my friend! You will be missed, but never forgotten!”

“Mark was at Greenville Rescue when first started in 1986,” said Steve Wenning, chief of Greenville Township Rescue Squad. “He has been a mainstay of EMS in Darke County since 1977…38 years of unwavering service to the Greenville community. Mark was my right-hand man and I could always depend on him. Mark was an EMS educator for 20 years and has taught many EMTs not only in Darke County but throughout the region. The EMS community has lost a great man. And, the Greenville Community has lost a great man.”

Brian Phillips, training and education coordinator, had this to say: “Mark was my EMT instructor back in 1995. I remember thinking after the first day of class, ‘This man has so much passion for public safety.’ Shortly after becoming certified as an EMT, I was hired at Union City, Ohio, Fire and Rescue. Mark was the ambulance director at the time. My first day Mark welcomed me with open arms. He spent a lot of time showing me around the station and giving me words of wisdom. Mark even bought my lunch that day. He had a way of connecting with people. I started Greenville Township Rescue in 1999 and, once again, Mark met me with open arms. We lost a great leader. I lost a mentor and a good friend.”

Dotson’s son, Jerome, who is following in his father’s footsteps as a public servant and is captain of the Ansonia Volunteer Fire Department, remarked, “He not only provided an amazing role model to me and my siblings but also to all of the firefighters and EMTs who worked with him. He will be missed by many.”