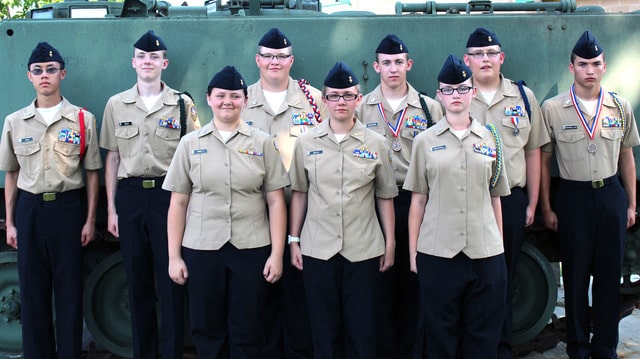 BLT is designed for freshman and sophomore students who have been identified for future NJROTC leadership positions. Students attended camp with 120 other students representing NJROTC schools from West Virginia, Michigan, Ohio, and Indiana. Students participated in an intensive five-day course of military drill, military courtesies, athletics, marksmanship, orienteering and academics.

The week was concluded with a graduation ceremony, where parents could attend and see the cadets recognized for their accomplishments. Cadet Jeremy Eshbaugh was named one of eight Honor Cadets during the ceremony.

LA is designed for junior and senior students who have been identified for senior leadership positions within their respective home schools. Cadets eligible to attend must pass the Navy’s physical fitness test and be among top students academically in their respective high school class. Students attended camp with 180 other cadets representing NJROTC schools from Ohio, Illinois, Indiana, Michigan, Minnesota, Ohio, West Virginia, and Nebraska.

During the eight-day course, students were given instruction in basic shipboard operations; science, technology, engineering and mathematics (STEM); proper handling of rubber rafts; and sailing lessons on Lake Michigan.

The goal of LA is to produce better leaders through training in personnel inspections, room inspections and drill throughout the week. The cadets ended the week with a graduation ceremony during which they received a silver shoulder cord to wear on their uniforms, signifying the successful completion of the leadership academy.

Cadet Austin Grote was one of eight cadets who received an exceptional Leadership Award.

NJROTC is a citizenship development program that instills in high school students, in U.S. secondary educational institutions, the value of citizenship and service to the United States.