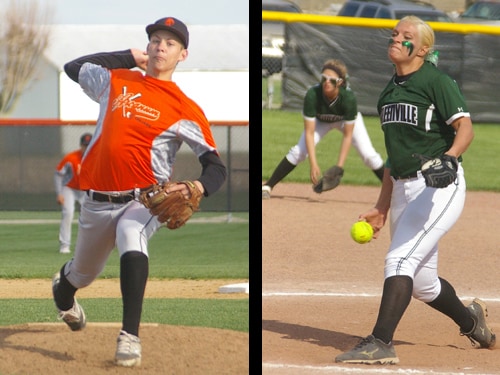 DARKE COUNTY – Athletes who excelled at pitching and hitting are the Daily Advocate’s 2015 baseball and softball players of the year.

Pohl was named the Cross County Conference baseball player of the year as he helped lead the Trojans to the conference championship with an 11-1 record during his junior season.

“I thought he had a great season,” Arcanum baseball coach Randy Baker said. “I thought he really, really improved from the year before.”

The CCC’s player of the year honor usually goes to a senior, Baker said, but Pohl was so strong that he couldn’t be overlooked.

“I think Conner had such a great year that it’s hard not to give it to him,” the Arcanum coach said.

Pohl established himself as Arcanum’s ace pitcher and posted a 0.90 ERA for the season. He pitched six no-hit innings in the district championship game of the OHSAA tournament.

At the beginning of the season Arcanum wasn’t sure who would be its top pitcher, but Pohl quickly secured that title, Baker said.

Pohl also led his team with a .353 batting average and 20 RBIs. His RBI total was second best among all Darke County baseball players.

Pohl worked really hard in the offseason to improve his game, Baker said. His play was crucial to the Trojans’ success in the regular season and postseason, the coach said.

“That was huge for us,” Baker said. “That was one of the reasons we won the league and went as far as we did in the tournament.”