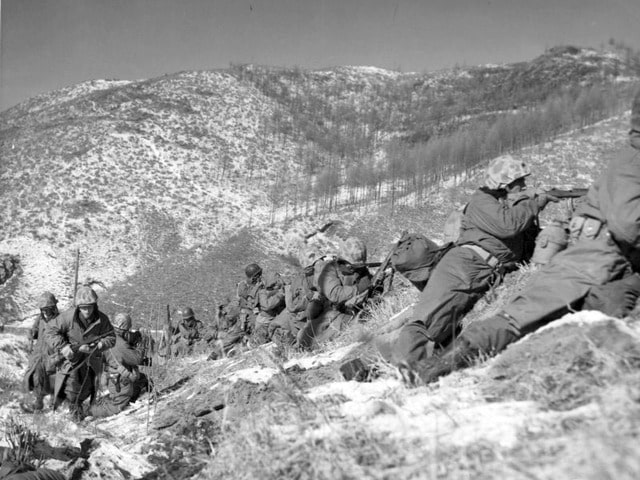 U.S. Marines engage Chinese forces near Korea’s Chosin Reservoir in 1950. June 25 marks the 65th anniversary of the beginning of the Korean War.

DARKE COUNTY – It has been called “The Forgotten War,” though those who fought in the Korean Conflict of 1950 to 1953 were not likely to forget their experiences there.

It was unlike any war in which Americans had previously fought. Whereas the combatants of World War II were clearly defined, the Korean War was a “proxy war” – a struggle in which the two superpowers of that time, the United States and the Soviet Union, sought to strike at each other in a manner which would not lead to total war.

Nuclear weapons, possessed by both nations by this time, proved to be a restraining force in this regard.

The war also saw China, which fell to communism in 1949, exert itself as a major player in world events.

Korea had long been an independent nation until 1910, when it was annexed as a colony of the Empire of Japan. After the defeat of Japan by the Allies in World War II, Korea was split into two spheres of influence, with the Soviet Union occupying the northern half of the peninsula, and the United States occupying the southern half.

In the north, a communist government — the Democratic People’s Republic of Korea (DPRK) — was established under the leadership of Kim Il Sung. The south formed its own government, the Republic of Korea (ROK), with Syngman Rhee at the helm. Subsequent efforts to reunify the two halves under one government proved futile.

The impasse between the rivals was shattered when North Korean troops, tanks and artillery crossed the 38th parallel on June 25, 1950, seeking to impose its rule over the entire country. Backed by Soviet and Chinese arms, DPRK forces quickly overran the outgunned and outmanned ROK forces, seized the southern capital of Seoul, and drove the opposing troops to the southern tip of the peninsula.

The invasion put the recently established United Nations to the test. The UN Security Council condemned the invasion as aggression and voted to send military aid to the South Koreans. The Soviet Union, a permanent member of the council, was boycotting the UN at the time and thereby failed to forestall military action.

In all, 21 nations would participate in what the UN termed a “police action.” Much of the fighting and financing of the war, however, was done by the United States.

President Harry S. Truman quickly committed US forces to aid South Korea, first with air and naval support, then introducing troops on the ground. Though Congress never issued an official declaration of war, it voted appropriations for the fight.

American servicemen performing otherwise uneventful occupation duty in Japan soon found themselves in danger of being driven into the sea by well-armed and determined DPRK forces.

By the middle of September 1950, the dynamic had changed. Soldiers and Marines under General Douglas MacArthur, by then in command of all UN forces, executed an amphibious landing at the port city of Inchon, an invasion which rolled back the North Koreans.

Late October 1950 unveiled another dramatic turning of the tide, as China entered the fray, Wave after wave of China’s People’s Volunteer Army (PVA) crossed the Yalu River into Korea and commenced a furious assault against UN troops. PVA and DPRK forces pushed their UN adversaries southward, past the 38th Parallel, and seized Seoul in January 1951.

UN forces regrouped, taking the South Korean capital once more in March 1951. A static front soon developed between the warring parties, one which closely adhered to the 38th Parallel, the original border between north and south. Vicious fighting continued, with neither side achieving a crucial advantage or substantial territorial gains.

An armistice was signed July 27, 1953. The agreement ceased open warfare among the participants, but did not completely cease hostilities.

A highly fortified Demilitarized Zone (DMZ) was established along the final dividing line where the fighting stopped, separating the two ideological opponents.

Following the United States’ overwhelming victory in World War II less than a decade before, the cloudy, indeterminate conclusion of the Korean War gave many Americans a sense that they had not “finished the job” — unacceptable to a people known for their “can-do” attitude.

Despite its unsatisfactory conclusion, is it fair to say that the Korean War has truly been “forgotten?” As more than six decades have passed, and a great number of its survivors have died, perhaps it can better be said with a high degree of certainty that the vividness of the war has faded.

For many Americans, though, the war is remembered in one respect — through repeated airings of the 1972-1983 television series M*A*S*H*, which, though a comedy, often highlighted the terrible costs of the war.

Regardless of how it is perceived, or not thought of at all, by present-day Americans, the conflict was a pivotal event of the Cold War era and its aftershocks remain in evidence even now.

Sixty-five years on, North Korea exists as a pariah nation, its people subjugated under the oppressive dictatorship of Kim Jong Un, grandson of Kim Il Sung. Despite its ongoing need for foreign aid to feed its subjects, North Korea continually seeks to acquire nuclear weaponry and repeatedly acts as a provocative, unstable presence in the region.

The country remains primitive in contrast to South Korea, which emerged after the war to transform itself into an economic and technological power.

More than 28,000 US soldiers currently remain in the country to help defend South Korea if it is once again attacked by its neighbors to the north.

To this day, no peace treaty has ever been signed between South Korea and North Korea, or for that matter, between North Korea and the United States. Technically, these nations still remain in a state of war with each other.