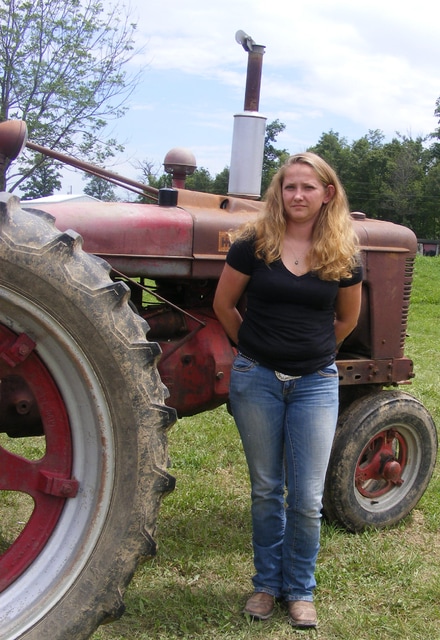 NORTH STAR — Joanne Stuck, vice president of the Darke County Steam Threshers, has been involved with the organization for four years.

She and husband Taylor’s friend, Josh Routt, got them involved.

“The president at that time asked me to take pictures for the club and it went from there,” she said. “We have friends out here. We enjoy coming out and helping.”

Since the Stucks have become members, their friends, Jason and Joey Yost, with whom she has been friends since they were 17, are also now involved and both serving as trustees, while Joey is the treasurer.

The Stucks live near North Star and are farmers.

“We do a lot of the ground maintenance, and a lot of times that’s hard work,” said Joanne, whose family is camped out at York Woods where the steam threshers reunion is held. “My husband is a trustee. We just have a tractor out here.”

She is used to the work, though, for they have a grain and livestock farming operation.

“And he does a seed cleaning business,” she said of her husband. “I help with that when needed. I help work the ground in the spring and bale hay when it needs it. And, I have a lot of daily chores to do.”

Her favorite thing to do is run the combine when they harvest.

“I grew up on a farm and we always had animals,” she said. “We didn’t have much land, but we had animals.”

Joanne is in charge of the Haunted Woods, helps out with the 127 garage sales that take place there, was here last year for Annie Oakley Festival and probably will do that again this year.

The Stucks met at the Triangle outside of Greenville.

“That’s where my husband’s grandparents, Harold and Evelyn Stuck, met,” she said.

Joanne is the mother of 16-year-old Brooke and sons Seth 11 and Troy 8, all of whom are students at Versailles.

“After high school, I worked at Weaver’s for about three years, then went to Cooper’s as a quality assurance tech, and I became an egg grader through the U.S. Department of Agriculture and was a floater at the different plants,” she said.

She hasn’t work outside the home since she had surgery two years ago on her wrist bone, which was deteriorating on her right side.

Joanne said she is originally from West Milton, where the family lived until she was 13. Then, her family moved to an Arcanum address, a Laura phone number and in the Franklin Monroe School District.

She is the daughter of Darrel and Debra (Mitchell) Cress.

When asked if she did this kind of farm work at home when young, she replied, “No, I was not allowed to when growing up because girls didn’t do farm work. I harvested dad’s beans last year and he said, ‘I thought I’d never see my daughter do that.’ I hope he’s proud of me.”

Joanne, who does her photography on the side, said she takes the photos that appear on their Facebook pages.

She also loves to cook and does that a lot around the camper this week.

“My specialty is pie iron pizzas,” she said.