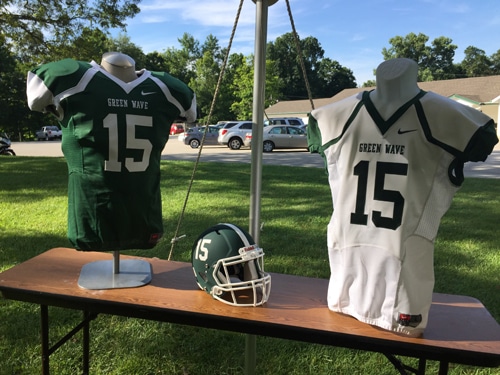 “We had a record 31 teams out for a total of 128 golfers, which is an increase of 14 teams from last year,” said Steve Lantz, one of the directors and wide receivers coach.

“The winning team for the golf outing ended up shooting a 56, which is an amazing 14-under-par,” said Adam Eberwein, one of the directors and defensive coordinator. “The victors were Mike Albright, Luke Rosengarten, Greg Rosengarten and Nick Anderson.”

The fabulous foursome will have their names on a huge trophy, which will be displayed at the high school. They also will receive an individual engraved trophy to take home.

“We far exceeded our financial goals, and we are pleased that we will be able to purchase 85 new Nike mesh uniforms for home and away games for our players,” Eberwein said. “This is our only fundraiser of the year which goes solely to the football program, and we have been planning this since January.”

There was also a silent auction after the golfing and the meal in which 51 items were donated and later bid on. There were Cincinnati Bengals and Cleveland Browns tickets, autograph footballs and jerseys. The most coveted prize was a 1964 Browns team photo for which the minimum bid started at $500.

Golfing games were also available for the competitors at Turtle Creek Golf Course. A couple of the games on the links were for the longest drive, longest putt and closest to the pin on holes six, eight, 11 and 17.

The most talked about hole was the punt, pass and kick hole where for $5 golfers could punt, pass or kick a football to the hole and then tee off from there. Mulligans were $5 per person and $20 per team. Skins also were available at $20 per team in which the best team score on a particular hole got the skin from the other teams after all scores were tabulated.

Sponsors abounded for the golf outing and hog roast. The Super 7 sponsors for the fund-

Raiser, who were not mean but flashed plenty of green with donations of $500 or more, included John Coomer Investments, the investments manager for Miami Valley retirees. Also a Mean Greenie sponsor was Minuteman Press, Hurd’s Towing Service, Maid-Rite, Drew Ag. Transport Inc., and rounding out the Super Seven was Post 7262 of the VFW and the Hickerson Family.

“I want to thank all the participants in the golf outing for helping us get our guys new uniforms,” Greenville head coach Aaron Shaffer said. “Also, I want to acknowledge Winners for taking care of the hog roast. Last but certainly not least, I want to praise Turtle Creek, who did a fantastic job of getting the course in great shape and a shout out to Derek Ary, head golf pro, for getting the golfers ready on the rules and regulations of this 18-hole event.”