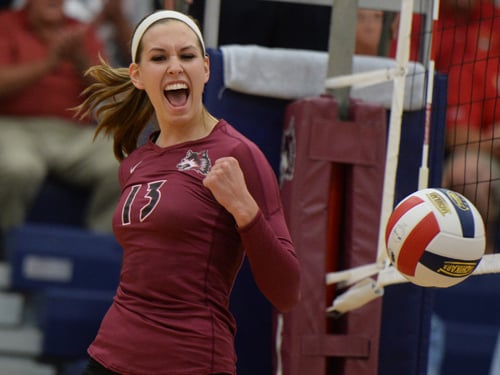 Livingston was chosen as the Indiana University East Female Athlete of the Year for the 2014-15 school year.

Livingston (Union City, Ohio/Mississinawa Valley High School), a senior-to-be in the IU East volleyball program, was a third-team Tachikara-NAIA Volleyball All-American in 2014 after leading the conference and finishing 27th in the nation with 3.60 kills per set. She was named the American Volleyball Coaches Association Northeast Region Player of the Year and Kentucky Intercollegiate Athletic Conference Player of the Year.

Livingston set the IU East single-match school record with 28 kills against Indiana University Southeast on Sept. 20 of this past season. She tallied double digits in kills in 26 of IU East’s 33 matches, and she reached double figures in kills and digs in 10 matches. Livingston led the team with 425 kills, 3.60 kills per set, a .265 hitting percentage and .924 serve receive average.

“It was a really nice surprise,” Livingston said. “I was especially happy with getting this award seeing as we added the women’s basketball team this year and they did so well in their first season!

“I think that this last season I really just focused on being consistent for my teammates since we were so young. I really just wanted to be that reliable upperclassman.”

Livingston also is the IU East Female Academic Athlete of the Year for 2014-15. She is the first Red Wolf athlete to win both honors in the same school year.