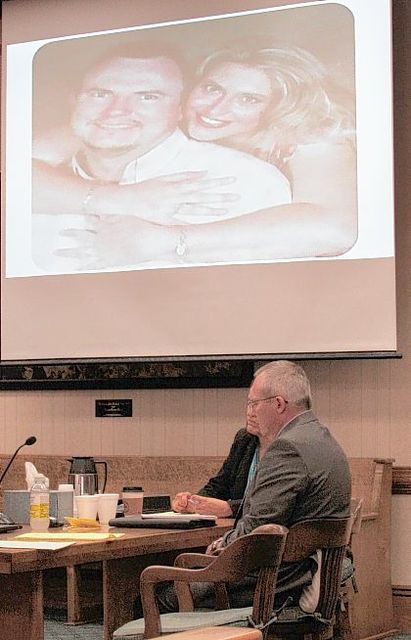 GREENVILLE — The defendant broke down sobbing as he was forced to relive the moment of his wife’s death Tuesday afternoon in Darke County Common Pleas Court.

Raymond Emerson, 46, of Arcanum, is on trial on a charge of corrupting another with drugs, a second-degree felony, in the death of his wife, Angela Emerson Jan. 18, 2014.

The jury was seated after the selection process Tuesday morning and opening statements took place after lunch.

The state has charged that Emerson was responsible for cutting in half a Fentanyl patch that he then applied to her body. Prosecution contends it was the overdose of this powerful narcotic painkiller that killed her.

Defense attorney James Detling told the jury there are many unanswered questions in this case, including any determination that it was the Fentanyl that caused Angela’s death.

The presentation of the state’s case was set to begin with the playing of the 9-1-1 recording of Raymond reporting finding his wife slumped over in vomit and not breathing. Technical difficulties pushed that evidence to the end of the day.

In the call, Raymond can be heard sobbing as he checks his wife for signs of life and finds none. He continues struggling with her, begging her to breathe, and telling the operator repeatedly that she is dead.

Emerson fought against the tears repeatedly Tuesday in the courtroom as the state showed images of his wife as she was found in their home by the early responders, and later as she appeared when her body arrived at the Montgomery County Coroner’s Office for autopsy.

He succumbed to the grief and wept openly but quietly as the recorded sounds of his anguished wails were played in the courtroom on the 9-1-1 call.

The state, represented by Assistant Prosecutor Deborah Quigley, called several witnesses on Tuesday, including the first officer on the scene and the forensic pathologist who performed the autopsy.

Witnesses testified to multiple prescription drugs being found at the scene, including an empty packet for a Fentanyl patch, which was not of the same strength as the partial patch that had been found on Angela’s body at the time of her death.

Forensic pathologist Dr. Susan Allen said nine different drugs of five different drug classifications were found in Angela’s system, including high levels of three of them. For six of the drugs in her system, the decedent had prescription, but for three others, including the Fentanyl, she did not. Marijuana was also found in the drug screen.

Dr. Tim Kathman, Darke County coroner, testified that her death was a result of “multiple drug intoxication, consisting of antidepressants, antipsychotics, antiepileptics, benzodiazepines and Fentanyl.” He said she was being treated by three different physicians, including a psychiatrist and a pain clinician.

Angela reportedly had a history of prescription drug abuse and illicit drug use, and she had been admitted to Wayne HealthCare on three different occasions for drug overdose in the 15 months preceding her death, including overdoses on Heroin and Fentanyl. Two of those three overdoses were in the three months prior to her death.

Detling said in his opening statement that in one of those overdoses, it was her husband who saved her life by performing CPR until the emergency medical squad arrived.

The charge for which Emerson is on trial covers only the Fentanyl patch.

The trial is expected to conclude on Wednesday.