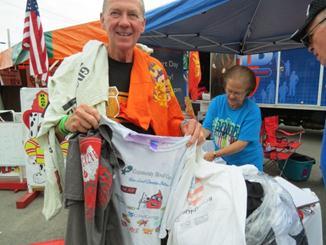 GREENVILLE – There must be magic in a Community Blood Center (CBC) donor t-shirt. Someone makes their first blood donation and takes one home. One day they open their drawer… and it’s stuffed with t-shirts that have somehow multiplied like a bunch of brightly colored Easter bunnies.

There is definitely magic in the way donors keep coming back, rolling up their sleeves, and sharing the gift that saves lives. Over the years the CBC t-shirts they receive pile up; and once a year donors will reach deep in the drawer for the “family reunion of t-shirts” called “CBC T-Shirt Day” at the Great Darke County Fair.

CBC’s Dana Puterbaugh and her advisory committee volunteers gathered at the fair Wednesday to give away gifts and register anyone wearing a CBC t-shirt for door prizes that included KitchenAid countertop appliances. The CBC LAB mobile classroom also made a special appearance, with kids of all ages welcome to take a tour inside and learn about blood.

Donors usually choose their favorite CBC t-shirt to wear for T-Shirt Day. With 97 lifetime blood donations, Arcanum donor Steve Schlechty has a healthy t-shirt collection. He couldn’t pick just one, so he kept putting them on, one t-shirt over the other. He showed up at the CBC booth wearing 17 of his “favorite” t-shirts.

“I thought it would be something different!” said Steve. “I was going to go for 25. I stopped at 17, but I could have gotten more on. The best one is the one with all the holes in it!”

Many donors do like to pull out their oldest tee, like unearthing a historical artifact, and seeing if it still fits. “Oldest T-shirt of the Day” honors might well have gone to long-time platelet and plasma donor Ivan Patterson of Greenville. His bright white “Apheresis LifeLeader” t-shirt looked as good as new. Remarkable, considering Ivan has owned the shirt for 23 years!

“Marilyn was the one who conned me into that,” said Joe, who now has 46 lifetime donations, most of them plasma donations. “I’ve been doing it for a while, and that’s good when you’re an AB-positive.” Blood type AB is the universal plasma donor.

Joe drew a poker chip at the booth that allowed him to choose a Donor Gift left over from previous CBC campaigns. He added another t-shirt to his collection.

Greenville donor Peg Emrick arrived wearing the bright orange t-shirt from the 2013 summer blood drive campaign to win a Harley-Davidson motorcycle. She also got to choose a gift – but not a t-shirt. “I’m taking a mug,” she said. “I’ve got so many t-shirts – I’ll try something different!”