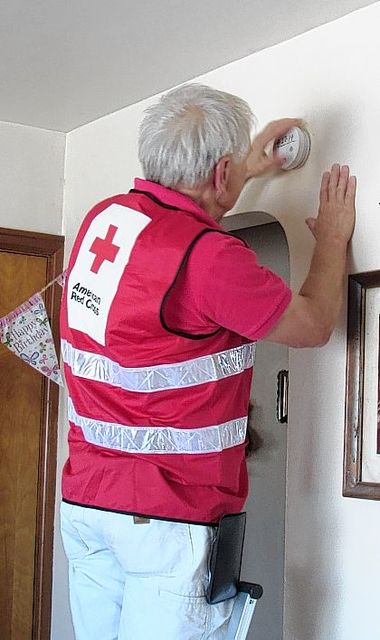 UNION CITY, Ohio — About 15 Red Cross volunteers and staffers took to the streets of Union City Tuesday evening to raise awareness about home fire safety and install smoke detectors in homes in need of them.

Lynne Gump, executive director of the Northern Miami Valley Red Cross, said the event was part of a five-year program over the six-county area covered by her office. The program is in its second year.

“We’re doing at least one community a month,” she said. “Last month we were in Springfield. During the winter we do apartment complexes, so they (volunteers) don’t have to do the long walks outside.”

Residents were also educated on home fire safety and the importance of having working smoke alarms. The education was offered to residents regardless of whether they permitted volunteers to enter their homes.

For residents who did not receive a visit, were not home, or did not wish to permit volunteers to enter at the time of their visit, smoke alarm installation is available by appointment at no cost to the residents. Interested residents should call the Northern Miami Valley Red Cross office directly at 937-548-1002, and installations will be completed by members of the Union City Fire Department.