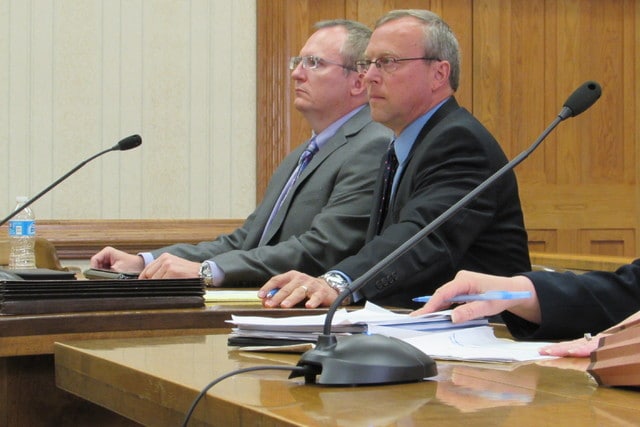 GREENVILLE — An Arcanum man was sentenced to jail Monday morning in Darke County Common Pleas Court on a charge of Corrupting Another with Drugs, following the overdose death of his wife in January 2014.

Raymond Emerson, of Arcanum, was convicted in August of Corrupting Another with Drugs in relation to the overdose death of his wife, Angela. A charge of Involuntary Manslaughter was dismissed.

Emerson was originally convicted of a second-degree felony, but his attorney, James Detling, filed post trial motions requesting acquittal and a new trial, among his arguments was that the state did not prove necessary elements of the case.

Judge Jonathan Hein agreed in part, ruling that because the state had not proven nor asked the court to recognize that Fentanyl is a Schedule II controlled substance, he would be required under the law to sentence Emerson based on the lowest level of the crime of which he was convicted, which would be a fourth-degree felony.

Deborah Quigley, assistant prosecutor of Darke County, objected on behalf of the state to the lesser charge. The state recommendation was for a year in prison, citing Emerson’s awareness of his wife’s history of drug abuse and overdose, as well as his training as a nurse.

Emerson conceded that he had failed his wife in a statement to the court, after speaking of the “insidious” nature of drug abuse.

“I failed my wife,” Emerson said, “but so did her doctors and her friends and everyone else that watched Angie insidiously fall over the last five years. The current system failed my wife, just as I failed my wife … The guilt that I feel personally for not getting her help sooner will haunt me for the rest of my days … You could lock me away and take all that I own and it would not even come close in comparison to what I’ve already felt.”

Emerson said he now has a medication delivery system implanted for his chronic pain issues “to protect other people from my medications.”

“I’m innocent of giving my wife that Fentanyl,” Emerson continued. “But I am not innocent of causing the death of my wife. For five years I let my wife suffer, and I didn’t get her help, and for that I am truly sorry.”

Angela’s mother, Janice Miller, of New Madison, also chose to address the court, telling how she and her family miss Angela.

“I’m not saying you didn’t try. You didn’t try hard enough,” Judge Hein told the defendant before sentencing him. “You had the most knowledge and the best position to try to do something about it. I’m not saying maybe you weren’t exhausted of trying, but that’s no excuse.”

Emerson was sentenced to 60 days in jail and 60 months of community control, in addition to a $5,000 fine, a six-month license suspension, probation with high-level supervision, costs paid within 12 months, 100 hours of community service, and any recommended treatment programs for substance or mental issues.

“There’s a presumption of local sanctions, not prison sanctions,” Hein said, “so I follow the governor’s lead and the legislature’s lead to try to follow the law.”

Hein also criticized the problems in the law enforcement investigation, saying that it was not the fault of the officer but poor supervision.

“When the investigations don’t measure up, it has to be called out,” Hein said, adding that it was not fair to juries to ask them to make decisions on guilt or innocence with insufficient investigation.

Angela Emerson died in January 2014 of a multiple drug overdose. Including the half Fentanyl patch her husband was accused of administering, the post mortem drug screen found nine different drugs of five different classifications in her system. According to testimony, she had a history of prescription drug abuse and illicit drug use, as well as three drug overdoses requiring hospitalization in the 15 months preceding her death.