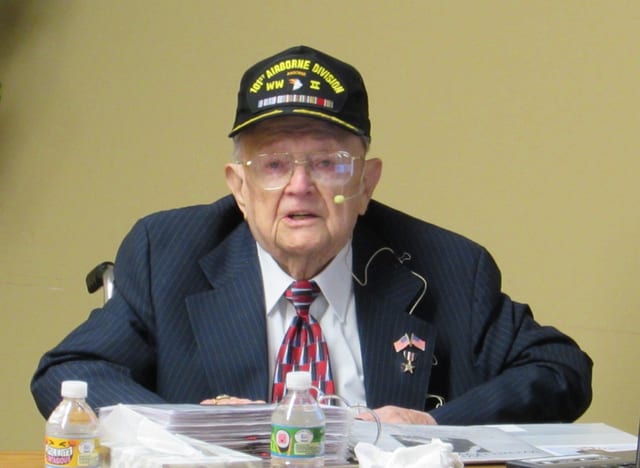 Despite moments in which his voice wavered and tears formed, Joe Bredeson graciously shared stories of his time as an Army paratrooper to a large gathering at the Greenville Public Library on Saturday.

Bredeson, 95, represents a generation of brave Americans, often termed “The Greatest Generation,” that took on the forces of Nazi Germany and Imperial Japan in World War II.

The veteran spoke of his enthusiasm upon joining the Army in 1940 after only one year of college at the University of Wisconsin.

Bredeson said he originally hoped to become a fighter pilot, but unfortunately didn’t make the cut. On a power point presentation, he showed a photo of a British Spitfire fighter plane.

Though denied flight school, Bredeson trained for four years with British commandos before transferring to the 82nd Airborne Division. He then was assigned to the 101st Airborne Division (the “Screaming Eagles”), which, along with the 82nd, made the initial assaults behind enemy lines near Utah Beach during the June 6, 1944, D-Day landings in Normandy.

Bredeson said that after making his parachute jump from a C-47, he landed in 3 to 5 feet of water, an effect of the Germans breaking area dikes to flood the landscape.

He said he later awoke to the sight of a cow eating hay under which he was hidden from nearby German patrols.

“A farmer and his wife hid me in their barn,” he said. “Everyday when they would come to milk the cows, they would bring me food and water. I couldn’t go to the bathroom, but under those circumstances, it was paradise.”

Eventually, he was able to reunite with his unit and help them continue the drive to liberate Europe.

His initial eagerness to fight, however, eventually became tempered by the reality of combat. Bredeson was originally issued a flamethrower as part of his equipment, but threw it aside, saying, “I can shoot a man, but I can’t set him on fire.”

He also related a story about being in a foxhole with a buddy, who was shot in the head and died instantly right beside him.

“It comes back to me now and then,” he said, pausing to collect his emotions.

In retrospect, Bredeson found it strange to be trying to kill German soldiers who were similar in age, saying, “We’ve got to be crazy, shooting boys the same age. It took me two years [after the war] to get my mind back.”

Nonetheless, he said that despite the real bullets flying, he and his comrades developed a closeness difficult to fully describe.

“When you fight for one another, you become brothers — blood brothers.”

Reflecting back on those times, Bredeson says his generation felt exceedingly confident they would emerge from the war victorious.

After the war, Bredeson worked as a civilian with the U.S. Graves Commission in Europe. He also told the group how he met his wife Denise, a Frenchwoman, who returned with him to the United States. Their marriage lasted 62 years until her death in 2007. The couple and their children moved to Greenville in 1961 where he was the manager of the Swift Fertilizer Plant (now Conagra) until 1985.

In a humorous vein, Bredeson remarked how he had killed a German officer and taken his two Luger pistols and a camera as souvenirs. He packaged them to ship back to America, but the items disappeared in transit.

“I guess someone needed it worse than me…but may he die in hell,” he said, to a burst of laughter.

Bredeson interspersed his wartime tales with his thoughts on the current state of America and its place in the world.

“I wish America would stand up and stop being pushed around,” he said.

Despite it all, the Purple Heart and Silver Cross awardee expressed pride in his service and love for his country.

“I love America,” he says. “Every morning I get out of bed and thank the Almighty.”

For upcoming events hosted by the Greenville Public Library, view the library’s website at www.greenville-publiclibrary.org or visit its Facebook page.