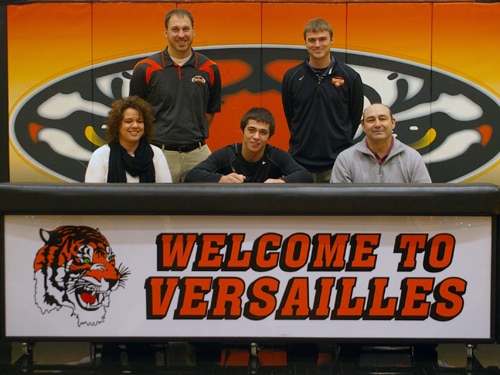 Dieringer, the son of Marc and Karla Dieringer, said he’s glad the recruiting process is finished.

“It feels pretty nice,” he said. “All the thinking of where I want to go and decision making is over, and now I know what I want to do so I can focus on that and go ahead and do it.”

Dieringer, who plans to study business in college, said Wittenberg was a good fit for him because of its proximity to home and its great football program.

“It’s close to home; it’s only about an hour and 10 minutes away,” he said. “And then I liked the campus up there whenever I went there to visit a couple times. And I think it will be nice to play football up there because the coaches seem like they actually get to know you and help you as a person as well as training to be a good football player.”

Wittenberg, which is an NCAA Division III program in the North Coast Athletic Conference, has won five national championships in program history and only has had one losing season since 1955. The Tigers finished 8-2 this past season.

“They have a great tradition of winning and hopefully keep it alive, keep going,” Dieringer said.

At Wittenberg, Dieringer plans to be a receiver. He starred on offense, defense and special teams at Versailles, tallying 28 catches for 466 yards and three touchdowns his senior season.

“I think Corey is a very well rounded football player,” Versailles football coach Adam Miller said. “For his size he’s very well put together, he’s strong, he’s knowledgeable of the game, and most importantly he’s got a great work ethic, which will usually be a deciding factor on making it at the next level.”

Miller is confident that Dieringer will be successful during his college career and thinks he could earn some playing time early for Wittenberg.

“I think he’ll do well,” Miller said. “He definitely has the abilities, and he’s a very physical player. So not only will he do well catching the ball but when they need him to block I think he’ll do a great job blocking, also. And I think he’ll also find some time early special teams-wise as well.”

Dieringer joins his brother, Kyle, as a college football player. Kyle played linebacker for the University of Findlay this past season but plans to transfer, possibly to Wittenberg.