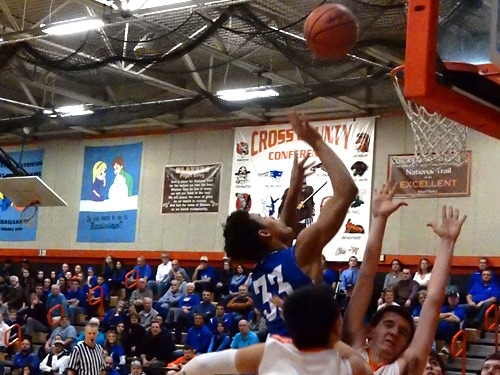 From the flow and rhythm of the teams’ quick paced offense to the stingy “in your face” man-to-man defense, which limited the Blazers to only 16 points in the second half, the team concept was front and center.

The Jets got off to a fast start. When Kyle Ressler converted two free throws with 3:11 to go in the first quarter FM led 8-2. Trail’s Chase Thompson answered back with a triple to bring the Blazers within three, but then Bradey Hesler took over for the Jets.

Hesler scored three consecutive field goals to push the Franklin Monroe lead to 14-5 until a closing-second bucket by the Blazers’ Weston Haws made the score 14-7 Jets at the end of one period.

The FM defense had allowed only three baskets and shot opportunities were held to a minimum. If a scoring chance did occur for National Trail, Ethan Conley was there to reject the shot on numerous times.

“Defense has always been our calling card and always been the staple of what we want to do,” Franklin Monroe boys basketball coach Troy Myers said.

The offenses enjoyed more productivity in the second quarter, and it would be the Blazers’ best period of the night. National Trail 6-foot 3-inch sophomore Dalton Mason helped get offense rolling for the Blazers by scoring eight of his teams’ 15 points.

This, however, would not match the effort of Franklin Monroe senior Zach Hyre, who scored 12 of his game-high 23 in the quarter and gave the Jets a 31-22 lead by intermission.

“He got going,” Myers said of Hyre. “Got some shots to go down. Helped his momentum. What I saw was a guy who was facilitating the ball on offense and able to pass the ball. Made some nice passes, was unselfish. Our team was unselfish, and that’s something that’s really very fun to coach, a team that’s unselfish and wants to play together and share the basketball the way we did.”

The Jets cranked up the offense to begin the second half and engaged the defense. They commenced on a 23-7 run that would span the entire third quarter, bringing the score to 54-29. Mason Conley led the breakaway with nine points in the period.

“It was hopping,” Coach Myers said. “It was a nine-point game at the half … Really good job of sharing the basketball and getting stops right away in the third quarter to allow us to build our lead and ultimately play comfortably in the fourth quarter.”

“We’re playing our best basketball right now,” Coach Myers said of looking toward the upcoming Ohio High School Athletic Association tournament. “Doesn’t mean we’re invincible or we’re not going to get beat. By no means am I naïve enough to think that. We’re not that far yet. We haven’t arrived yet by any means. We’re working everyday … We get in the tournament and see what happens.”

Franklin Monroe upped its record to 9-9 on the season and is now 6-4 in the CCC. 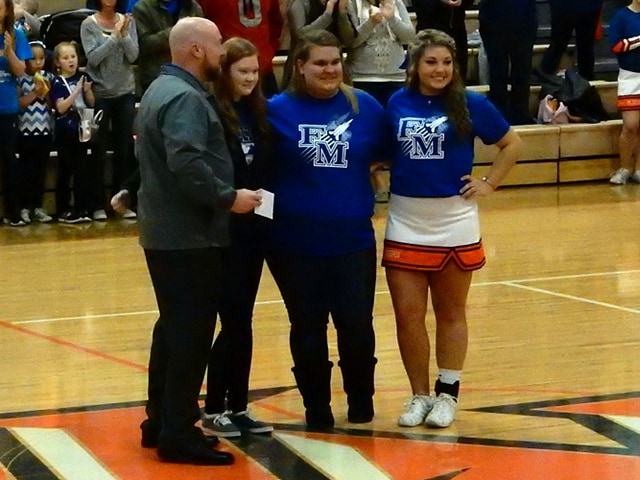 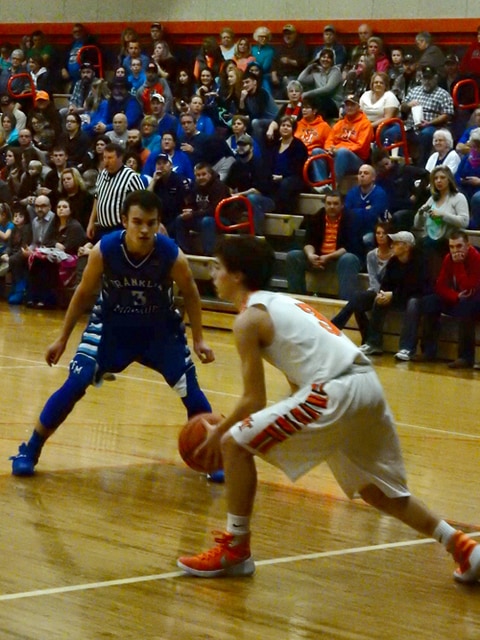 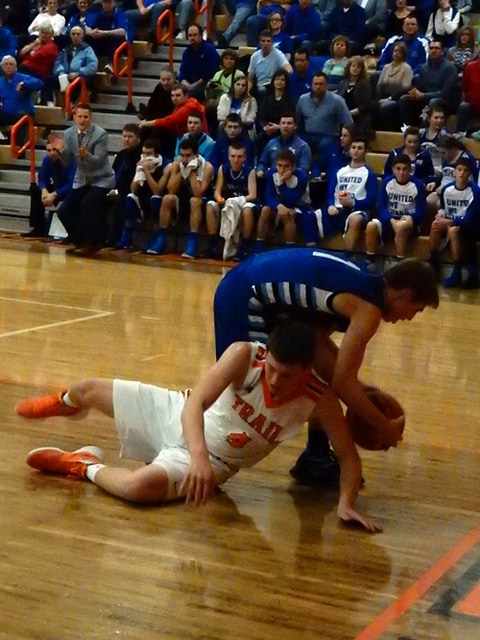 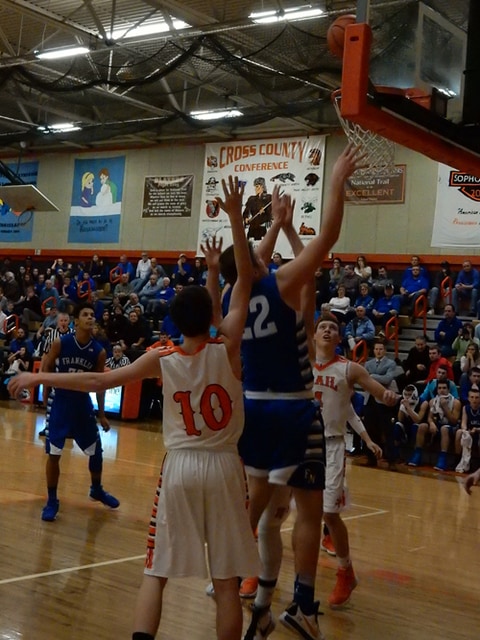 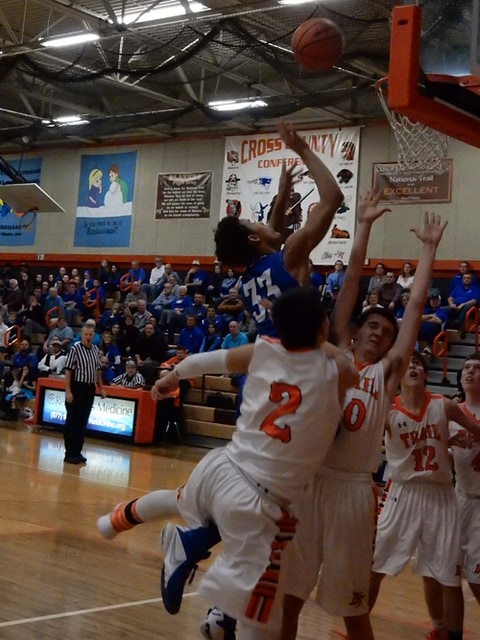 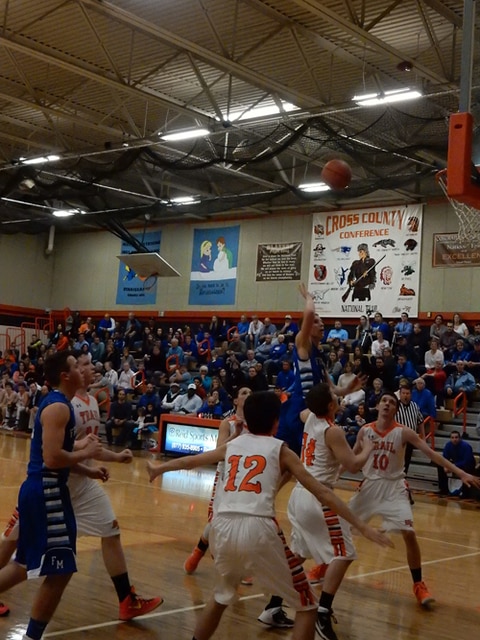 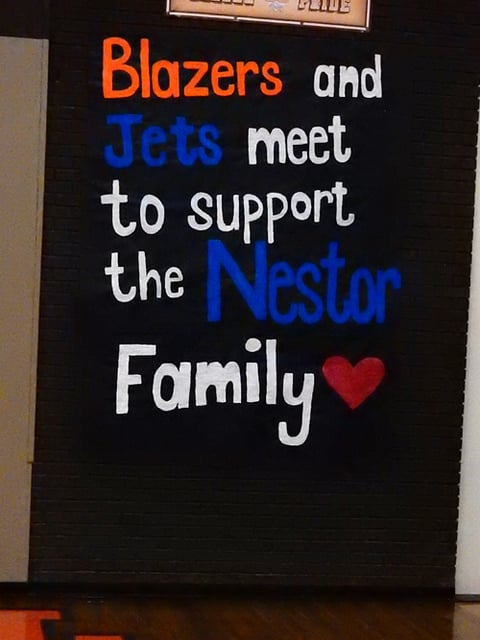