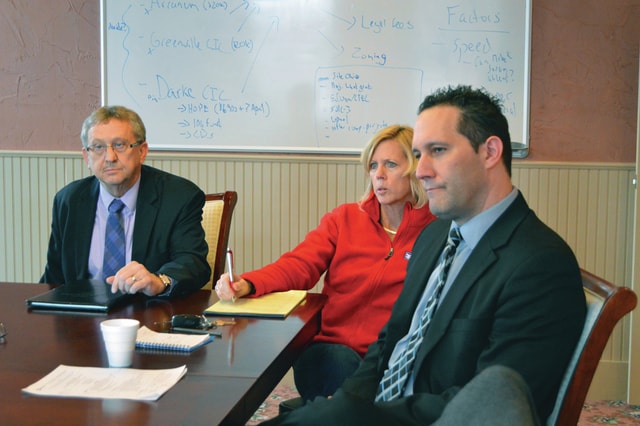 DARKE COUNTY – The search will soon begin for a new economic development director for the county, as the current one, Marc Saluk, will be leaving the position on March 1.

Saluk has accepted a new position in Hunterdon County, New Jersey, as its economic development director with the Department of Planning, Economic Development and Land Use. The position is newly created for the county, Saluk said.

Saluk explained Hunterdon County is starting a public/private economic development effort very similar to Darke County’s economic effort in the beginning when he took on the position in 2009. He said Hunterdon County has been developing an economic plan for the past 18-24 months.

“There’s a lot of similarities between Darke and Hunterdon counties in terms of what their planning processes have been to start their efforts, how they want to achieve their goals and what their end games are,” said Saluk.

Hunterdon County, which sits near the Delaware River, has an estimated population of 130,000 and is part of the New York Metropolitan area. According to the U.S. Census Bureau, the county has the fourth highest median household income in the U.S., about $105,186.

“I am not leaving because of anything that has to do with the county or the organization or the work that we’ve done — all of which I’m very proud of — and would continue to be happy doing if I stayed on the job,” explained Saluk “It’s been a goal of mine for a long time to move back east to be closer to where I grew up and be much closer to family and friends. So for me it’s going home.”

Saluk has lived in Philadelphia and New York so he’s looking forward to being closer to family, friends and the culture in which he grew up.

“I’ve learned more and grown more as an individual during my time in Darke County through the work that we’ve done more than in any other phase of my life,” reflected Saluk. “The time I’ve spent here will always be important to me as will the relationships that I’ve built.”

The formation and growth of the collaborative economic development effort, Partnering for Progress (P4P), a diverse group of public and private entities and individuals, is one of Saluk’s significant accomplishments. To date, Saluk said the partnership has more than 90 contributing entities from seven counties in four states.

As of January 27, the total partner investment has been $1,750,801 which includes money from the county’s real estate conveyance fee fund.

“What’s particularly amazing about Partnering for Progress is how fast a really diverse group of people and organizations in this county were able to come together and get on the same page and paddle the same direction so well together for so long,” said Saluk. “The payoff is all around us every day in the form of thriving companies, low unemployment, a multitude of workforce programs and transformation in the way we go about development in Darke County and with our surrounding neighbors. I think the Partnering for Progress effort has been an extremely positive agent of change for the county and I’ve been very proud to be part of that effort.”

Other successes Saluk noted were putting workforce programs in to place in response to post-recession industry growth; a partnership with job seeker’s Hometown Opportunity (http://hometownopportunity.com/) website; the creation of an alliance between industry and education that’s producing an internship/job shadow program; partnerships with neighboring counties on both sides of the state line (Ohio and Indiana); and the recent opening of the Advanced Manufacturing Training Center in partnership with the Greenville Career Tech Center at Greenville Senior High School in November 2015.

Saluk said he was particularly proud of company projects and partnerships helping to spur development with large companies such as Whirlpool ($45M, 200,000 square-foot expansion), Midmark ($25M, 100,000 square-foot expansion) and Fram ($10M retention), in the P4P years and also with the midsize companies such as Jafe and Ramco who have both tripled in size during the last seven years.

“We’ve been very good at using the resources and skills of people involved in the effort to design and implement programs well, vet ideas thoroughly, and move successfully down a path, and that partnership has been probably the biggest payoff of the effort,” acknowledged Saluk.

Saluk submitted his formal resignation to Darke County Community Improvement Corporation (CIC) President Dave Keiser during the organization’s Wednesday meeting. The board voted to accept his resignation with regret.

Keiser said a search committee is being formed and will be working to find a replacement for the soon-to-be open position.

“The biggest challenge will be trying to find a qualified candidate that can step into the position at where we are today as an organization,” said Keiser. “The search committee’s challenge will be finding someone that can step in and continue to run with it as Marc has. Marc has done a tremendous job for us here the seven years he’s been here. There’s been so many great accomplishments he’s given us so far.”

Darke County Commissioner Mike Rhoades agreed that Saluk has done a good job for the effort.

“He has done a splendid job,” praised Rhoades. “He stepped up to the plate, he has gotten the county where we are today for jobs and manufacturing and bringing new stuff in. He has remarkable enthusiasm for the job and I’m going to miss him when he’s gone. The next person coming in has some big shoes to fill.”

“Marc has been a very valuable asset to not only the county, but especially the City of Greenville with the manufacturing efforts he’s done over the last six years. It’s been a great working relationship between the economic development office and the City of Greenville. I wish him the best in his future endeavours,” said Bowers.

Keiser said after Saluk leaves the position, the economic development office will continue to remain open. He encourages anyone that needs assistance to continue to call the office.

“It will be business as usual,” he said. “A transition team is in place to handle day-to-day operations.”

Saluk said he can’t thank the Darke County CIC board enough for its support over the years.

“I’ve never been prouder of anything in my life than Partnering for Progress, I will never, ever, not care about how it does or how the county does and I will always be a resource,” said Saluk.

Saluk is expected to start his new role in New Jersey in mid-March.