UNION CITY, Ohio —The Mississinawa Valley Board of Education approved several trips at its recent meeting.

Approved were an overnight trip to Columbus for the BPA State Contest on March 17 and 18, with four students competing; an overnight trip for the fourth-grade students, teachers and chaperones to the Cincinnati Zoo May 25 and 26, 2016; and the MD unit was approved for an out-of-state trip to Richmond, Indiana, on April 22.

• An FMLA for Elaine Bailey.

• A resolution to accept the tax rates and amounts as determined by the budget commission.

It was reported the board will be getting a second estimate for parking lot sealer, and it was noted that there are 34 classified and certified employees who have contracts expiring at the end of the 2015-16 school year.

The junior/senior prom is scheduled for April 15 at Romer’s Catering in Greenville,

The board went into executive session for the purpose of discussing personnel at 7:21 p.m., returned to regular session at 8:21 p.m. and adjourned at 8:22. 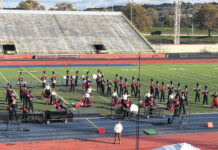