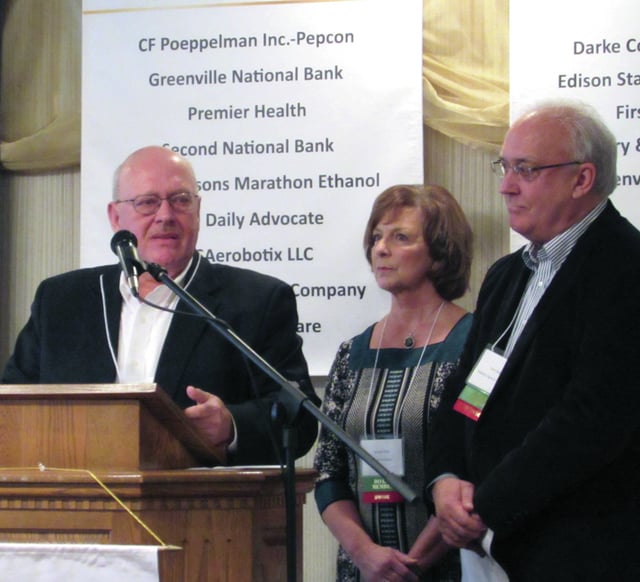 “Darke County Chamber Ag Day has been in existence for more than 60 years. The purpose of Chamber Ag Day is to honor those in agriculture and to foster partnerships among our farmers, agri-business and traditional business,” said Chamber Chairman, and fifth generation farmer, Matt Aultman.

“Agriculture is one of our county’s greatest assets. Not only do we rely on agriculture for our food, feed, fiber, and fuel— our agricultural producers preserve our environment, and help drive our economy. Agriculture provides almost everything we eat, use and wear on a daily basis,” said Aultman.

Dudley Lipps was honored with the Agricultural Advocacy Award, and Downing Fruit Farms was presented the Agriculture Achievement Award.

Lipps was born in Darke County in 1955, said Tony Roberts, who presented his award. “He grew up in a home his grandparents built; today he resides in that same home.”

Lipps was active in 4-H as a youth and showed cattle. He attended Westmont and New Madison schools and went on to graduate from Clark Technical College.

His wife, Sharon, also grew up showing cattle, and they met while attending cattle shows. They were married in 1977 and had two children who were active in FFA and 4-H raising and showing hogs and cattle. They now also have a son-in-law and three grandchildren.

“This was truly a family effort,” Roberts said.

Lipps also served during this time in the New Madison Rescue Squad.

In 1991, he was a founding member of the pork and steak tent at the Great Darke County Fair, with proceeds going to 4-H and FFA. Lipps also is a past chairman of the Darke County Chamber of Commerce.

Lipps also devoted “countless hours” to preparing the new cow barn for use following the 2013 fire.

During harvest, he is known for showing up on the farm with meals for ag producers, Roberts said, and he even has a rotisserie in the back of his truck to feed the farmers while moving from farm to farm.

“It is evident he garners love from his family, respect from his fellow workers, and appreciation from clients and customers,” Roberts said of Lipps. “Many know him as a friend.”

“He has been and continues to be, professionally and personally, a supporter of agriculture in the local community,” Roberts continued.

Lipps also was recognized by the Ohio Senate, the governor’s office, the Ohio House of Representatives and the Ohio Department of Agriculture.

“One of the main reasons this is one of the best places to live in Ohio is people like Dudley Lipps,” said State Rep. Jim Buchy, “because they represent the values that we have all learned from generations and generations, and that’s why we’re the best.”

“It’s very much an honor and very humbling,” Lipps said of the recognition. “Darke County is a great place.”

Lipps said he was inspired by Dr. Marvin Thompson and Marion Grimes. “Those two gentlemen really pushed me at a younger age to do my best, and that’s what we’ve tried to do,” Lipps said.

Beverly Delk presented the Chamber award for Agricultural Achievement to Downing Farms, saying the award is presented to a “producer who is actively involved in the agricultural chain and has demonstrated extensive participation, leadership and support of agriculture.”

“When comparing apples to apples, sometimes it’s best to consult an expert,” she said.

Downing Fruit Farm dates back to 1838, when its founder and his family left South Carolina. They discovered spring water at the farm’s current location, where its founder, who was already an orchardist, began to plant apple trees.

Fresh apples and apple products make up 80 percent of the farm’s production, in an annual amount of about 10,000 bushels of apples in more than 70 different varieties.

“The farm also features a full line-up of seasonal fresh produce, including five acres of melons, 20 acres of sweet corn, as well as peaches, plums, grapes, cherries, blackberries and more.”

Many of Downing’s apple varieties are exclusive to the farm, developed over the years by the family themselves. During the harvest, customers to the farm are invited to walk the grounds and explore the orchard’s 2,500 fruit trees, with the oldest producing tree around 80 years old.

“The trees are planted strategically throughout the property to capitalize on the natural airflow patterns that will allow the trees to withstand a few degrees lower temperatures and dry out faster after rains to prevent fungus,” Delk said.

“Today we honor the founder of Downing Fruit Farm, John Downing, and its current owners, Scott Downing and Bob Downing.”

Bob Downing, when accepting the honors, recounted a story in which he’d planned to go to Purdue to study horticulture, but the chief horticulturalist at Purdue pulled him aside and told him, “There’s no sense in you coming to Purdue for horticulture when you’ve got the best teacher in the Midwest … you take that money and put it into an orchard.”

Shearer spoke on the use of technology and, specifically, Unmanned Aerial Systems (drones) in modern agriculture, explaining how the data collected through the special cameras on the UASs enable farmers to track every seed planted, find areas of stress and customize their planting patterns and hybrids to maximize crop yield and field health.