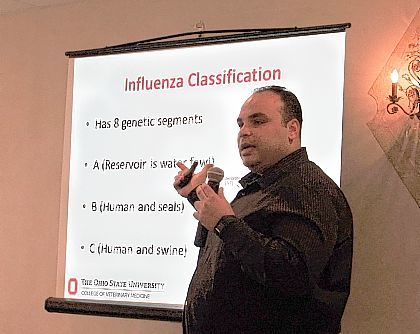 GREENVILLE – As a major producer of eggs and poultry in the United States, Darke County held its collective breath last year as the news stories of an avian flu outbreak of unprecedented virulence told of millions of birds wiped out over a shockingly short period.

When word came out last month of another outbreak in Indiana, nerves were again on edge, so an update on the outlook for avian flu this year was an appropriate start to the recent Ag Outlook, presented by the OSU Extension.

El-Gazzar first reviewed the 2015 outbreak and explained the biology and origins of the deadly virus.

He explained the different types of influenza, and noted that Influenza A, which infects water fowl, is particularly dangerous to birds because it mutates quickly, and different strains can easily combine into new strains.

Most strains, he said, are low pathogenic, meaning that they will cause mild illness in the birds, but they have a low mortality rate. Some forms, though, are highly pathogenic, as was the strain involved in the 2015 outbreak.

Most avian flu strains pose no danger to humans, El-Gazzar said, with few exceptions, but none of those that infect humans have appeared in the United States.

Last year’s outbreak is believed to have originated in Asia, where the practice of allowing domestic and wild waterfowl to intermingle enables the virus to spread quickly. Outbreaks of the virus then appeared in Western Europe and crossed over into the western parts of Canada then the United States with migratory birds.

El-Gazzar noted the strict biosecurity measures that were put in place but said it was more likely that the outbreak ended thanks to hot weather and the end of the migratory season.

When a deadly strain of avian flu appeared in Indiana last month, response was swift with depopulation of the facilities birds and testing of all birds in an area twice the typical 10 km range from the facility.

Nine more cases of avian flu were found, but those were of a low-pathogenic variety, so the appearance of the deadly mutation was apparently the first case and was contained, El-Gazzar said.

What hit in 2015 was a highly pathogenic H5N2 strain that had genetically mixed from a Eurasian H5N8 and a North American H?N2 strain. The result caused such devastation that it “came close to a food security issue,” El-Gazzar said, wiping out more than 48 million birds because when a case is discovered, the entire flock must be destroyed.

El-Gazzar said what made the 2015 outbreak unique and so deadly was the relatively long incubation time of the virus. Typically, he said, the avian flu viruses cause mortality within about two days of exposure. The 2015 outbreak did not cause death until about five to seven days after exposure, allowing much more time for the virus to be spread to other flocks via humans and possibly rodents before detection.

The outbreak was controlled by setting up a 10 km “surveillance zone” around all detected cases and subjecting all birds in the area to testing. Affected flocks were depopulated entirely.

The real problem with control came in the disposal of massive quantities of birds involved. The first method was on-site composting, which was effective for turkeys and broilers. The egg-laying facilities, which can house as many as 5 million birds or more, posed a much larger problem.

In addition to composting, birds and manure had to be disposed of by landfill, burial, incineration and rendering.

El-Gazzar said the response to the 2016 cases found in Indiana was much faster, thanks to last year’s experience. The surveillance zone was expanded, depopulation completed, and disposal and cleaning are currently underway. Because the deadly form evolved in the United States from a less virulent strain, officials believe it was caught in time, and no additional positive cases have been found thus far.

El-Gazzar said the threat of avian flu is something that must be addressed immediately when it is discovered. Outbreaks have entirely wiped out poultry industries in other countries. The 2015 outbreak in the U.S. caused directly losses to the industry of nearly $1 billion. Iowa alone, where the impact was heaviest, lost more than 30 million egg layers.

Indirect costs of the outbreaks include production losses, business continuity losses and export losses, as other countries blocked imports of U.S. poultry and eggs.

Custer pointed out that the impact of an avian flu outbreak goes well beyond just the poultry and egg industry, even just considering the effect on the demand for corn and sopybean meal.

If half the poultry in the county were lost for a six-month period of time – a generous timetable, as Iowa is looking about about three years to fully repopulate – it would reduce corn demand by 27 million bushels, which is about 9 percent of the state’s entire corn production. Soybeans would see about a 5 million bushel reduction in demand.

Custer said the lessons of 2015 were hard learned, and Ohio was actually able to benefit financially from the outbreaks in Iowa and Minnesota.

“I feel a little better because we’re starting to figure this out,” Custer said, but he warned that it is easy to become lax when the threat is not immediate.

He said the advanced biosecurity measures established during last year should be continued, and preparations should be made for outbreak, including financial, depopulation, disposal and cleaning.

Custer also encouraged local producers to wisely invest the economic gains made from the misfortune of those producers who were hardest hit last year to provide security against financial devastation if the same thing should happen here.

The ag outlook also include updates on the next Farm Bill, land values and the grain market outlook for the year.