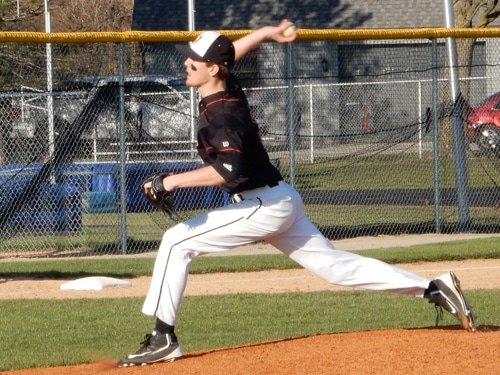 Over the first three innings Brett McEldowney was dominating and efficient. He retired the minimum nine Panthers he faced, striking out four.

“It was two weeks since his last start,” Versailles baseball coach Ryan Schlater said. “He only threw 20 to 30 pitches in the first three innings.”

The Tiger offense broke through in the bottom of the third. The rally began with an infield hit by Jacob Heitkamp. Jared Niekamp followed with a single to center. With two outs Keaton McEldowney walked, loading the bases for Brett McEldowney, who singled sharply to center to score two runs.

Parkway got its first hits off Brett McEldowney in the fourth. A bunt single allowed the lead-off man to reach then a single to left put runners on the corners with one out. After the trail runner stole second, Brett McEldowney refused to let the Panthers score by getting a strikeout for the second out and a grounder to first for the third out.

Versailles put up a four spot in the fourth thanks to only one hit, but what a hit it was. The inning opened with two walks, a sacrifice bunt, a sacrifice fly and two more walks to load the bases with two outs for Keaton McEldowney. The Panthers would make a pitching change.

“We’ve been working on a gap-to-gap approach hitting,” Schlater said. “I told him if you see a first pitch from the new pitcher you like, go get it.”

The first pitch Keaton McEldowney smoked the ball into the right center field gap for a triple, clearing the bases and enlarging the Tigers’ lead to 6-0.

Brett McEldowney cruised through the fifth but ran into some trouble in the sixth. Two lead-off hits and a walk loaded the bases, but he induced a force out at home. An error and a single allowed two runs to score, but Brett McEldowney stiffened and struck out the last two batters he would face. He would finish his effort at 76 pitches, 50 for strikes, and threw first pitch strikes to 16 of the 25 hitters he faced.

Versailles added a single run in the fifth and three more in sixth to push its total to 10. Collin Peters came in to pitch the seventh for the Tigers. He allowed a single run to the Panthers.

Niekamp also had a nice game for the Tigers. He singled and walked twice and scored three runs.