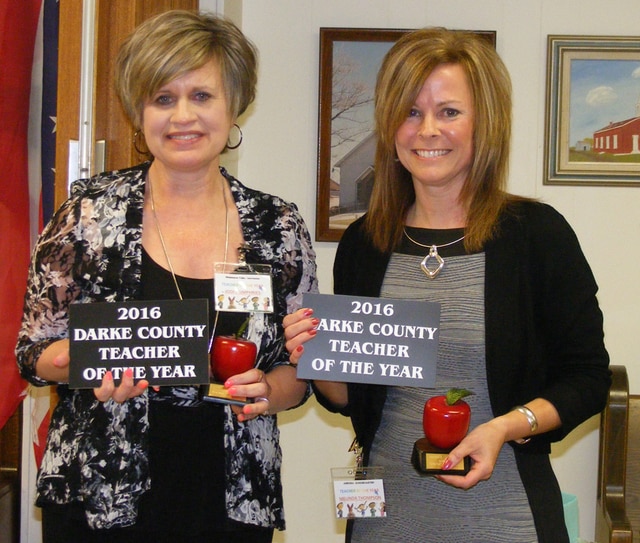 Selected for this year’s Teacher of the Year were Melinda Thompson, a kindergarten teacher in Ansonia Local School District, and Jodi Humphries, an intervention specialist at Mississinawa Valley.

Announcing the two local winners were Mike Gray, superintendent of the Darke County Education Service Center, and Ginny Nieport of the DCRTA.

“This is the first time in my 12 years as superintendent that this has happened,” said Gray.

“I am shocked and very honored,” said Thompson. “There are seven other great women who are fantastic teachers. I’m very grateful.”

Humphries commented, “I am both blessed and honored because I love what I do. Teaching is my passion. This award will be shared with my co-workers because it truly takes a team of teachers to educate a child.”

Thompson has a total of 14 years of teaching experience. She taught one year as a preschool teacher, one year of Title I Reading and 12 years as a kindergarten teacher with nine of those years at Greenville. This is her third year at Ansonia.

Thompson herself is a 1989 graduate of Greenville High School. She attended college in Findlay for two years and transferred to Wright State University (WSU) where she received her bachelor’s in rehabilitation. Then she went back into the Professional Year Program for certification in 1997.

The former Melinda Thompson married Trent Thompson [no relation] almost 22 years ago. The daughter of Shirley Williams, she has two sons, Garrett and Gabe.

Humphries has taught 21 years at Mississinawa, having taught special education students in grades 1-12 and making her now an intervention specialist.

“I was involved in one of the first multi-handicapped classes in the county,” she said.

That was in late 1980s during the No Child Left Behind movement, according to Humphries, who spent seven years working in the full inclusion classroom, where these handicapped students are mainstreamed them into the regular classes.

A 1985 Mississinawa graduate, she earned her bachelor of science in special education in all grades in all areas from BGSU and her master’s in art of teaching from Mary Grove University.

She and husband Bo have two daughters, Kaelyn, who is the mother of three children, and Victoria, in college to become a teacher. Jodi is the daughter of Mike and Sandy Grim.

Thompson was sponsored by Fred Matix, and Humphries by Rebecca Burnett.

April Wulber of the Darke County Education Service Center presented Kathy Harris of Tri-Village Local School District with the C. Michael Crawford Mentor of hte Year award, and Maxine Didier of the DCRTA presented scholarships to Ally Hayes of Greenville High School and Alyssa Morgan of Versailles High School. Hayes will be attending Anderson University and Morgan will be attending the University of Cincinnati.

“There were 17 applicants this year,” Didier reported.