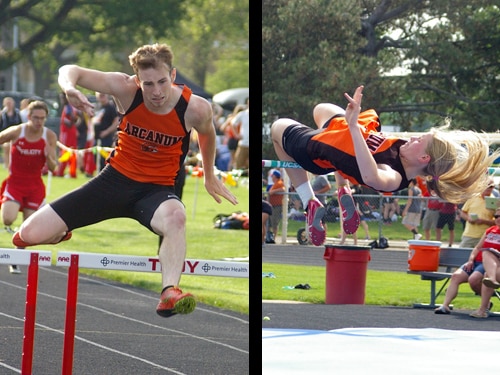 DARKE COUNTY – A pair of Arcanum track and field athletes who are having career years as seniors are The Daily Advocate’s athletes of the week.

At last week’s Division III district track and field meet at Dayton’s Welcome Stadium, Gibboney won the district championship in the boys 300 meter hurdles in a time of 40.63.

Gibboney, who is committed to compete collegiately for the Tiffin University track and field team, has done really well this season, especially since the Fred Durkle Invitational in mid-April, Kessler said.

“His best trait is he’s very focused,” Kessler said. “He knows what he wants, and he’s going to go out and get it.”

Gibboney always works very hard in practice, Kessler said, and spent the offseason competing in indoor track and field to make himself better.

“Austin knows what he wants,” Kessler said. “No one is going to stand in his way.”

Kreusch qualified for state in the girls high jump when she cleared a person-best 5 feet 1 inch on Wednesday in the Division III regional championships at Troy.

“When she made state we were ecstatic,” Kessler said. “She was so excited.”

Kreusch worked hard as a junior to make it to state but fell short of reaching her goal. This year she battled an injury early in the season that hampered her, but she persevered and has the second best high jump mark among Darke County girls.

Kessler credits Kreusch’s new relaxed attitude with helping her become even stronger this year and qualify for state.

“This year it was just more relaxed,” Kessler said, “I’m going to have fun this year and enjoy my last year of high school track.”

While Kreusch focused on having fun, that didn’t mean she was going to slack off. She works hard at everything she does, including in the classroom as evidenced by her being Arcanum’s valedictorian.

“When she does something she’s very dedicated,” Kessler said. “She always strives to do her personal best.”

Kreusch is very involved, and it’s great to see her finishing off her high school career with her best performances.

“She’s just a wonderful person inside and out,” Kessler said.