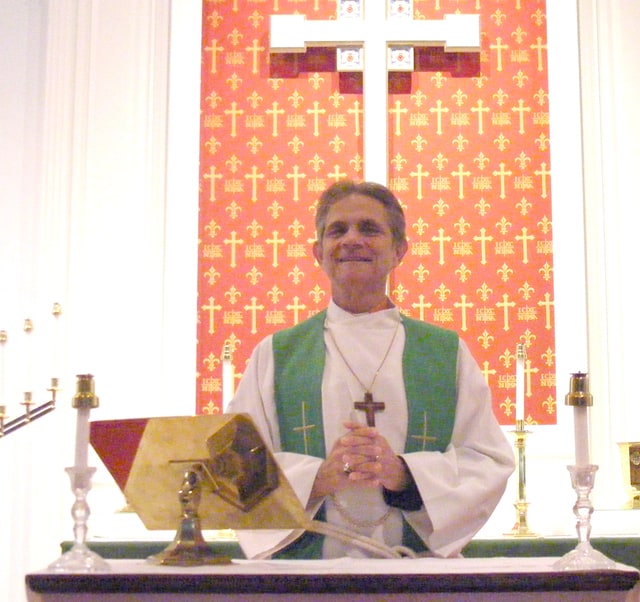 PITSBURG — The church family of Trinity Evangelical Lutheran is excited to be celebrating 150 years of ministry in the community.

The church, located at 8520 Oakes Road in Pitsburg, will be doing that celebrating next Sunday, July 10.

The original site of the church on Graw Road was built in 1914,” said the pastor, the Rev. Mel Musser. “It’s now a farm field with one full-grown sycamore tree.”

Prominent families of the church were Henninger, Kress, Kuhnle, Spitler, Graw, Werner, Angelbauer and Eibach, who came to the United States from Wuerttemberg, Germany.

“This church was yoked to St. Matthew in Ithaca,” said Katherine Obringer, who is working on the history for the church for the upcoming celebration. “When they grew, they needed a larger church on the same plot of land. They tore it down in pieces. Those families purchased a building and put it together on Graw Road.”

“We always shared a pastor with St. Matthew and,one time, they un-yoked almost 150 years of sharing the same pastor,” he said.

Musser said he has lived all over but was born in northeastern Ohio. He attended Kent State University, where he studied zoology and pre-med and met his wife. They later married and he decided to forego medical school and had different jobs, including flying airplanes.

“I joined the Air Force,” he said. “They liked me a lot and made me a personnel officer for 20 years. We traveled to Arizona, Virginia, Texas, Alaska and back to Ohio where I retired.”

He said it was in Alaska that he received another calling.

“That’s where the Lord spoke to me and called me into the ministry,” Musser said. “I called my former pastor and he pointed me toward Trinity Seminary in Columbus.”

His first call to the ministry was at Good Shepherd Lutheran Church in West Milton, where he served for 3 1/2 years before coming to Trinity in Pitsburg nearly three years ago.

“I was looking for something else, not full-time,” said Musser. “This match was made in heaven for the congregation and me. I was interim pastor here for 1 1/2 years and I became full-time on Jan. 1, 2015.”

He said the congregation of Trinity does “some good ministry work.”

“It is mission-oriented,” said Musser, who has lived with his family in West Milton since 1998, after having moved there from Fairborn.

The membership, when last published, was 224 and there is an average attendance of 72, according to Musser.

It’s a great church,” he said. “We usually get seven to 15 kids for Sunday school. We tried something different. Last September, we started having Sunday school during worship. Every single week, we’ve got kids.”

He said Marge Warner is Sunday school superintendent, and the Christian Education team is made up of Pam Oswalt and Rob and Jennifer Arling and himself.

“Two of them are retired teachers and one is currently a teacher,” he said.

“The Arlings head it up,” Musser said. “They have also done several service projects, like litter cleanup at Turkey Foot Park. They have involved people to bring in Christmas presents to be wrapped for donations. and they used that money to buy gifts for others kids at Dayton Children’s Hospital from their year-round wish list.”

Musser and wife P.J., who hails from the Lake Milton, Ohio, area near Athens, met while students at Kent State in Ohio history class. Today, she is a registered nurse at Good Samaritan Hospital in Dayton.

They have three grown children, Melanie, who is multiple handicapped and living in Fairborn, Niki who is married to Jake Angles and living in Greenville with their four children; and son Trevor 28.

At their property in West Milton, the Mussers raise alpacas. They have 12 of them, all males, and one llama.

For the celebration next Sunday, a committee has invited 200 people who grew up in the church.

“We reserved the cafeteria at Franklin Monroe School,” he said. “The meal will be catered by Michael’s and it’s all paid for.”

What made all of this possible?

“Marge Warner had the idea of taking 150 envelopes, since that is how old the church is, and place dollar amounts on them from $1 to $150, and children and adults could choose an envelope containing the amount they wanted to donate and put their money in it. So far we have raised over $,8,800. The envelopes were hung up by clothes pins on a rope and close by was a sign that reads, ‘Filling Plates and Potholes.’ This will help pay for the food for July 10, and we are working on paving our parking lot.”