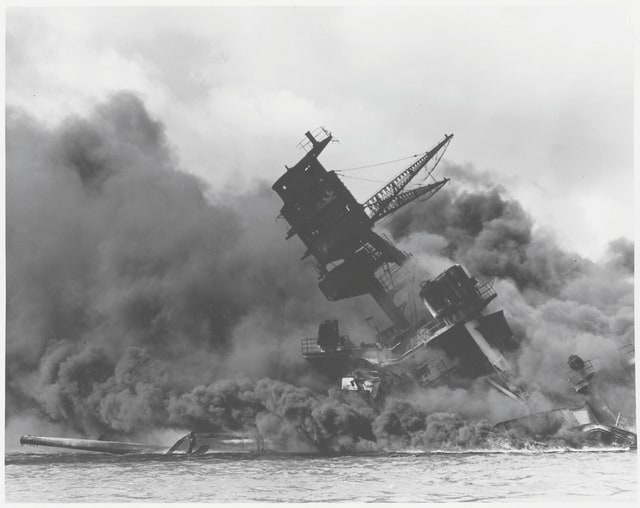 DARKE COUNTY — President Franklin Roosevelt called it “a date which will live in infamy.”

December 7, 1941, remains an “infamous” date even today, as the United States marks the 75th anniversary of the Japanese attack on the U.S. Naval Base at Pearl Harbor in Oahu, Hawaii.

Commemorations across the country will pay tribute to those who died that day as well as their comrades who perished over the course of the next four years. It was a defining moment in the lives of those who were there.

December 7, 1941, is one of those dates which conjures up the question “What were you doing when you first heard?” Because of the momentous historical shift it caused, the date continues to hold a pivotal place in the American psyche. The only dates even closely comparable among those still living today would be the November 22, 1963, assassination of President John F. Kennedy and the September 11, 2001, terrorist attacks on the World Trade Center and Pentagon.

For Americans at the time, December 7 was a typical Sunday. Citizens on the mainland were enjoying their afternoon when news of the attack was broadcast over the radio. Though President Roosevelt had urged strengthening of America’s armed forces, many expected a conflict with Nazi Germany first, which had been at war with Great Britain since September 1939 and the Soviet Union beginning in June 1941. Much of continental Europe, including France, had fallen under Nazi domination.

In less than two hours, 2,403 Americans were dead and an additional 1,178 others wounded. Four U.S. battleships lay at the bottom of the harbor, numerous other vessels were severely damaged, and hundreds of U.S. planes were smouldering in ruins. Fortunately for the Navy, its aircraft carriers were not at Pearl Harbor, but at sea during the attack.

The worst hit ship, the USS Arizona, saw most of its sailors perish as the battleship exploded. More than 1,100 died on that vessel alone, representing almost half the day’s death toll.

Within hours of the attack on Pearl Harbor, Japanese forces under Emperor Hirohito also launched aerial assaults on American installations in the Philippines and Guam and on the British possessions of Hong Kong, Malaya and Singapore.

Roosevelt gave his “Infamy” speech to a joint session of Congress December 8, asking Congress to declare war. A day after the first bombs fell on Pearl Harbor, America found itself officially at war with the Empire of Japan.

Japan’s Axis ally, Germany, would soon feel the sting of American wrath as well. Nazi dictator Adolf Hitler, in solidarity with Japan and angered by overt American aid to Great Britain, declared war on the United States December 11.

While the U.S. devoted itself to a “Europe first” strategy in conquering its Axis foes, the long journey to defeat Japan commenced nonetheless. Soldiers, sailors and Marines “hopped” from island to island, edging ever closer to the Japanese mainland over the next four years.

Germany surrendered to the Allies May 8, 1945. Japan held out longer, only agreeing to terms on September 2, 1945, following the atomic devastation wreaked on Hiroshima and Nagasaki.

America’s participation in World War II came at great cost. By the end of the war, more than 400,000 U.S. service personnel had died, marking the greatest loss of life in any conflict since the Civil War.

According to the U.S. Department of Veterans Affairs (VA), approximately 620,000 of the 16 million service men and women who served in the armed forces during the war were still alive in 2016. That number, naturally, will rapidly decrease as time passes.