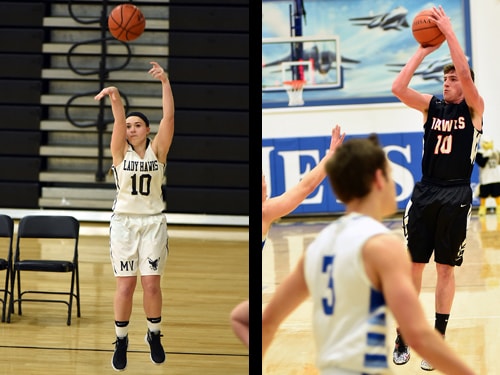 DARKE COUNTY – Two Mississinawa Valley basketball players who have excelled despite their teams’ struggles are this week’s Daily Advocate athletes of the week.

Even though he often faces double teams, the Mississinawa Valley junior is able to create his own shot and also create scoring opportunities for his teammates.

“He’s got a good shot,” Barga said. “He can get open. He can create space.

“He’s hitting the open person a lot of times.”

Bowman is fun to coach, Barga said, because he understands the game of basketball so well and because he’s such a good guy.

“It makes it so much more fun being around him because he’s such a good kid,” Mississinawa Valley’s coach said. “He’s a smart kid. He’s polite. It makes it that much better to be his coach.”

Bowman also is a hustler and gives 100 percent all the time whether it’s in a game or during a practice. He’s also a very positive person and a great athlete.

“Ethan is just a tremendous athlete. I think he could probably play any sport he wants to. He’s just that good of an athlete,” Barga said. “I’d put him on any team out there right now. He’s that good.”

Stump made her 39th 3-pointer of the season last week against National Trail, breaking her own program record for most 3-pointers in a season.

Stump, who is sixth among Darke County girls with 12.6 points per game, has since added to her record and will continue to push it even higher throughout the season.

“Mikayla, she’s our outside game,” Hershey said. “She’s done real well. She sets herself up real nice. Everybody’s keying on her and Kelsie (Hunt).”

The Mississinawa Valley senior has been so successful because of her hard work.

“She works hard at it,” Hershey said. “Her and her dad are in the gym all the time. She works at her shooting.”

Along with being a great shooter, Stump also is one of Mississinawa Valley’s top defenders.

“She’s real quick,” Hershey said. “She’s got a lot of steals. It makes her tough on defense.”