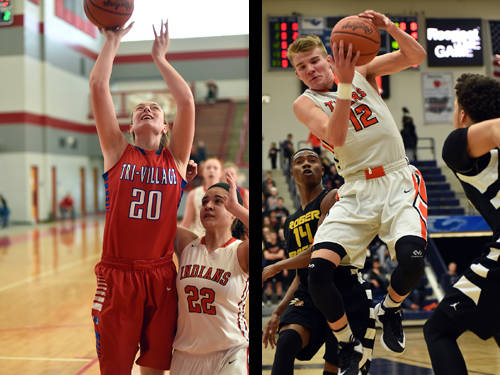 Downing averaged 17.3 points per game, 7.8 rebounds per game, 3.3 assists per game and 3.0 steals per game for Tri-Village, helping guide the Lady Patriots to the Cross County Conference championship. For her efforts she was named the CCC girls basketball player of the year.

“I think she sets the tone with her work ethic,” Tri-Village girls basketball coach Brad Gray said. “I think she’s a kid who’s extremely competitive, who works extremely hard to get the most of her abilities.”

The Tri-Village senior also was named the Division IV girls basketball player of the year for Southwest Ohio by the AP. She was named first team all-state by the AP.

Downing scored her 1,000th career point this season, but she’s not only a scorer. She’s a versatile player who can play inside or outside, taking on a number of roles including post and point guard. She can distribute, rebound and defend.

“All those intangible things really are where the value is for us,” Gray said. “I think that’s obviously the strength of her game. I think that’s what made her appealing to college coaches, her versatility.”

“She’s got the benefit of getting college paid for while playing a game that she loves,” Gray said. “I don’t know if it gets any better than that.”

Ahrens is just a junior, but he’s already verbally committed to play college basketball at The Ohio State University. He gets a lot of attention from opposing teams, players and fans, Versailles boys basketball coach Travis Swank said, but he’s handled the attention very well.

“Everybody knew coming into the season that he could score and everything, but I think he showed his complete game this season,” Swank said.

This year Ahrens scored his 1,000th career point. He averaged 22.4 points, 8.9 rebounds and 3.5 assists per game as a junior for Versailles, which won the Midwest Athletic Conference championship.

“We were pleased with what we did, what we accomplished,” Swank said. “We got a MAC title, sectional title, district title.”

“He became a complete player this year,” Swank said. “He bought in, and we reaped the rewards as a team all together.”

The Versailles junior has a ton of God-given ability, but he’s also a hard worker, Swank said.

“He’s constantly working at it,” the Versailles coach said. “He never takes any time off it seems like. He’s not satisfied with where he’s at right now. He wants to get better.”