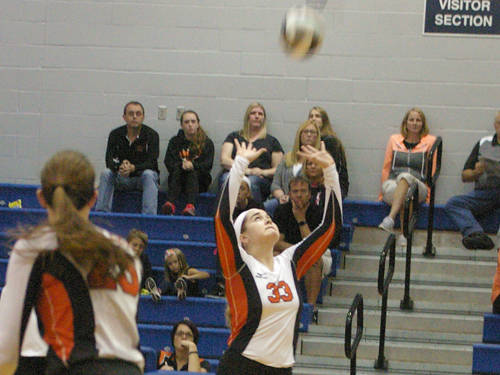 BROOKVILLE – Versailles advanced to the sectional finals of the Ohio High School Athletic Association Division III volleyball tournament with a dominating win against Northridge on Saturday.

Versailles beat Northridge 25-3, 25-5, 25-8 to advance to Thursday’s sectional final against Greeneview, which is scheduled to begin at 6 p.m. at Brookville.

Versailles’ dominance over Northridge was clear from the beginning of the match as Kami McEldowney served 18 consecutive points to begin the game.

“I told her it was totally going to be her responsibility and just to keep that mental focus of keeping the ball in the court, and the fact that she did that 18 straight times shows that she was ready and she was ready to start out that game,” Versailles coach Kenzie Bruggeman said.

After being down 18-0 Northridge was able to salvage three points but dropped the opening set 25-3.

Following Versailles’ dominant performance in the first set, the Tigers had a lapse to begin the second. Northridge scored the first two points of the game then also had leads of 3-1 and 4-2 before Versailles took over.

“That was just a mental lapse, and it was all errors on our side,” Bruggeman said. “I told them Northridge was fighting for their last game, too. They’re not just going to hand it to us. We have to go and earn it. Once we had that they took off.”

From a 4-2 deficit the Tigers scored 23 of the next 24 points behind strong serving from Caitlin McEldowney to win 25-5 and go up two games to none in the match.

Alexa Didier got Versailles off to a 6-0 start to begin the third set. From there the Tigers were comfortably in control the rest of the afternoon on their way to a 25-8 win and a three-set sweep.

Versailles was able to bring in several players off its bench throughout Saturday’s match including Kelsey Custenborder, Didier and Kate Stammen, getting the girls valuable experience.

“I love being able to put in the other girls,” Bruggeman said. “They’ve been working all year, too, and they’ve gotten better and improved.”

Versailles is now 18-6 this season and one win away from reaching the district finals of the OHSAA tournament.