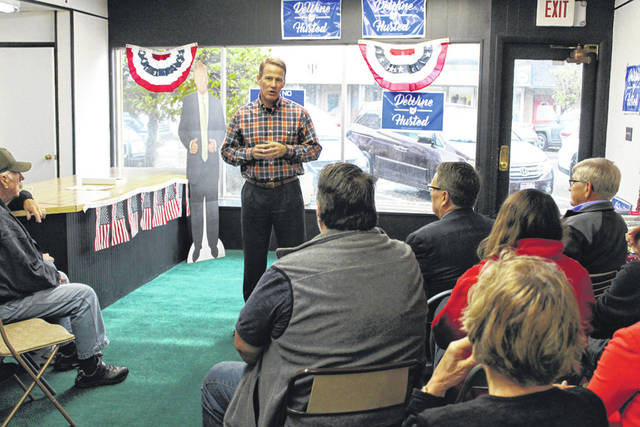 GREENVILLE — With the Nov. 6 midterm election rapidly approaching, Ohio Secretary of State Jon Husted, the GOP candidate for Lt. Governor, visited Greenville Thursday, seeking to rally local Republicans to get out the vote.

Husted is running with current Ohio Attorney General and former U.S. Sen. Mike DeWine, who is seeking to fill the seat of outgoing Republican Gov. John Kasich. DeWine and Husted are facing off in a closely contested race against the Democratic ticket of Richard Cordray and Betty Sutton.

Husted characterized this year’s race as “super close,” comparing it to the 2010 midterm election.

“At that time, [former Gov.] Ted Strickland and [then-Attorney General] Richard Cordray were running the State of Ohio. The Democrats were in charge of the state. And that election was really a referendum on their leadership,” he said. “The unemployment rate was nearly 10.5 percent, 400,000 people had lost their jobs over the course of that four-year period, and the state budget was in shambles. We only had 89 cents left in our savings account.”

Husted said Ohio’s improved economy and lower unemployment can be credited to the leadership of Kasich and other Republicans in Columbus.

“We’re moving in the right direction. Why would we want to go back?” he said.

Husted said Cordray is planning $4 billion in new spending, saying the Democrat’s spending plan would cost each Ohio household “more than $3,000” in higher taxes over the course of four years.

“Mike DeWine and I simply believe that you would make better decisions with their money in your pocket than we will in Columbus,” he said.

Husted also spoke out against Issue 1, the statewide ballot initiative that would lessen criminal penalties on many drug offenses in the state.

“It’s hard to find anybody who’s actually for it,” he said. “The only people that I think are out there advocating for it today are drug dealers, California billionaires and Richard Cordray.”

When asked if he would seek to return to Ohio’s municipalities all or some of Gov. Kasich’s so-called “Rainy Day Fund” — now estimated at more than $2.7 billion — Husted said he and DeWine hoped to return as many tax dollars as they could to local communities, as needed, to promote infrastructure, schools and drug education.

“What you want to do is you don’t want to take it to begin with. You want to leave it in the local communities,” he said. “That’s why we’re against Cordray’s tax plan, that would raise people’s taxes and send more money to Columbus. We want to leave it here.”

Despite the well-publicized and ongoing animosity between Kasich and President Donald Trump, each is planning campaign stops in Ohio to support the DeWine/Husted ticket.

“Electing Mike DeWine governor is the only thing that John Kasich and Donald Trump actually agree on,” Husted said.