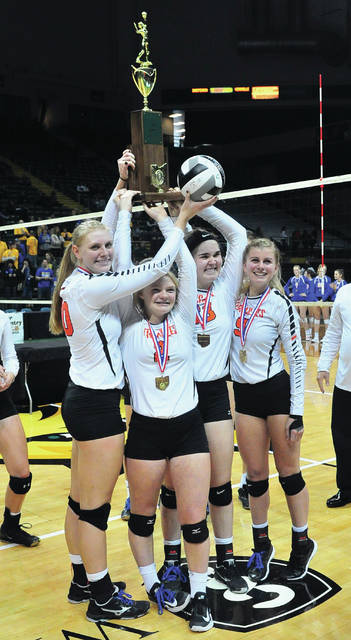 FAIRBORN — The Versailles volleyball team was sitting at 10-10 at one point this season before winning their final 10 matches and capping it by winning a second straight D-III state title with a 25-23, 25-23, 25-19 win over Independence Saturday at the Nutter Center.

And make no mistake, the four seniors sitting in the interview room afterwards had everything to do with that.

And in the end, Kelsey Custenborder, Alexa Didier, Liz Ording and Paige Platfoot got the perfect ending to their high school volleyball careers.

So, there was no point this season where Bruggeman ever stopped believing in what they could do as they went about their title defense.

“To lose what we lost last year and everything they did (leadership), that takes awhile,” Bruggeman said. “It really does. When you talk about pressure, I think it is more in-season. Dealing with everything we lost and at the same time playing in the MAC.”

And being state champs is like having a big X on your back.

“I remember when we lost two Miami East two years ago,” Bruggeman said. “Last year (when they beat Miami East in the regional final) we still had that rivalry and vengeance working for us. You get everybody’s A-game every night (when you are defending champs).”

But, as the season went on, those four seniors grew in that leadership role and the end result was Saturday.

Custenborder grew more comfortable in the setter’s role tas the season went on and the offense didn’t miss a beat. Didier moved into a back row position and became one of the team’s top servers along with playing great defense. And Ording, along with junior Lindsey Winner, just added to her strong game on the front row as Custenborder would be quick to attest that she had two of the best hitters in the state to set to.

But, don’t discount the importance of Platfoot’s role.

“She is the kind of player you need,” Bruggeman said. “She is the loudest voice on our bench. She is a leader in so many ways. She always comes to practice with a positive attitude and a smile on her face. She hustles all over the place in practice digging balls. She makes the other girls work hard. What we do in practice is what makes us able to play like we do in matches.”

Didier said the difference this year was easy.

“It is such an adrenaline rush (playing in the state tournament),” she said.

And the way all four handled things on the floor Saturday had a positive affect on the whole team.

“When Independence made their runs, they were all calm and there was no panic,” Bruggeman said.

The most telling moment in the interview was when Custenborder had trouble controlling her emotions when asked about the other seniors and this season.

“It is what we talked about the last couple matches,” Custenborder said as she fought back tears. “I talked about how we had to be able to do this. I just love these girls. This means so much.”

Back In Action: It may have not been the way Emma George wanted it. But, she was back in action Saturday after spraining her ankle in the regional final.

George admitted it was hard to go in for when her best friend Raegan Shaffer was injured in the first set. But, it was better than having to watch Thursday’s state semifinal match.

“That was the worst thing,” George said about not playing. “It is my first year playing varsity volleyball and I was a regular and then I went down with the ankle injury. I thought my season was over. But, I went to therapy and here I am.”

Super Sub: Six-foot-three junior middle Brooke Stonebraker got her opportunity in the regular rotation at the state tournament after George was injured at the regional and made the most of it. She had 12 kills on 18 attacks in the tournament with just two hitting errors and nine assist blocks in the two matches.

“It feels amazing,” Stonebraker said. “It has been such an up-and-down season. I never thought we would be back here.”

And Winner, who had another big match with 15 kills and four blocks, including three solo blocks, had mutual feelings.

“This season certainly got off to rocky start,” she said. “But, this (a second straight state title) just feels amazing.”

And provided the perfect finish for four very deserving seniors.