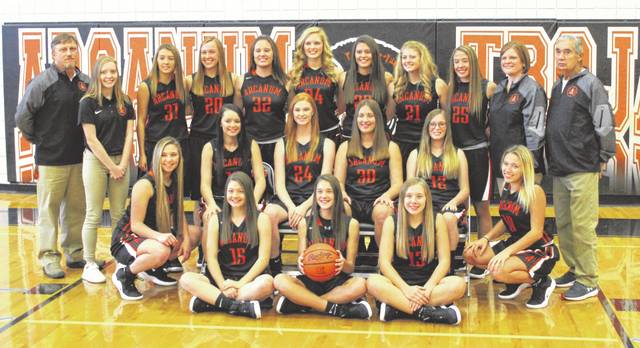 ARCANUM – They key word is “change” for the 2018-19 Arcanum girls basketball team.

The Lady Trojans have changed head coaches bringing in Michael Dean over the summer, and he is installing new offensive and defensive schemes to go with it. Dean will have his team playing a more up-tempo style of basketball.

“It’s a thick playbook and a lot of change to how they have normally played games,” Dean said. “A lot of change in offensive schemes and defensive schemes with what we want to do and they have absorbed it all over four weeks. That’s a lot to ask of them, but coming in here I couldn’t be happier not just with regards to the talent, but with how the kids, the parents and the staff and just everyone, the administration, has treated me and how they have accepted what we are trying to do here.

“We have a one team concept. No real set starters,” he continued. “That’s what I’m used to in Indiana so you look at our roster and it is 16 girls. Each night we will be expecting the five that start out there to step up, but I also will have a 12-player bench on varsity games and I expect the same from each and everyone of them as well.”

Along with that one team concept, Dean says the teams’ mantra is “You are your sister’s keeper,” meaning they all have to look out for each other.

“There is no pecking order on this team and they have really taken to that,” Dean said. “To me it is a beautiful thing when you have an upperclassmen who is basically vying for time on the court with a younger player who is as talented as they are, but just doesn’t quite know the game yet and they work with them and are not threatened by them.

“There is an old John Wooden saying where he said, ‘It is amazing what you can do when no one wants to take the credit,’” he continued. “To me that is how these girls are working together. I don’t think to them it really matters who is going to be making those baskets because they know they have a job to do together.”

Dean says he has lots of leadership on this team beginning with the four seniors – Lexi Unger, a 6-foot-1 post player, Macey Hartman, a 5-9 post player, Sasha Derringer, a 5-5 guard, and Mady Richards, a 5-0 guard.

“I feel we have some good, talented senior leadership,” Dean said. “Lexi, Macey, really all my seniors have shown it. Sasha Derringer. I couldn’t ask more of them being positive with the girls.”

With that said, the trio of captains for this squad are all juniors – Kayla O’Daniel, a 5-8 forward, Camille Pohl, a 5-10 forward, and Gracie Garno, a 5-8 guard.

“Gracie Garno is a great point guard,” Dean said. “She sees the court really well. Kayla O’Daniel and Camille Pohl are two really good players that I can depend on to play the 3, the 4 or the 5 spot, and with Kayla she can be my shooter at the 2 guard as well.

“You would have thought I had 10-12 seniors on the team the way the leadership is across the board including the freshmen,” he continued. “They are a very talented class and they have stepped up. They want varsity time and they want starting time, and they have made that known to the rest of the girls by how hard they work in practice. Instead of any in-fighting it has really made the girls in the upper class take a look at the game and themselves and they have responded phenomenally. I’m really, really happy with that.”

Other key players include Taylor Gray, a 6-0 freshman.

“We are going to work her in and I think she is going to really surprise a lot of teams with how far she is right now as a freshman under the board,” Dean said. “She is strong and sees the court well herself. She knows where to be on the blocks and is deceptively quick in transition.

“Eva Siculan (5-5) is a wonderful little sophomore guard,” he continued. “She is strong with the ball and does everything I ask of her. I’m going on about every kid and I could, but the thing is regardless of the five I put out there we are going to have a deep bench. Instead of having five starters, I feel like I have 10. It is just that deep. I’ve been with some good programs and never had a bench this deep. They work really hard and the talent is there. Right now I am just trying to figure out a rotation and it is tough because these kids work so darn hard and they are talented. As a coach that is a good problem to have. We run a high pressure defense too and we don’t let up on teams so we have to have a good, deep bench to replace kids as they get tired. The days of slowing it down and setting up the half court offense are over with. They have to be in shape and be ready and I feel that they are.”

Though Dean is a first-year coach here in Ohio, he is familiar with many of the teams in the Cross County Conference and figures it to be a challenging initiation.

“This league is tough,” Dean said. “Coming from Indiana I heard a lot about a few teams and I’ve known some of the coaches prior. Brad Gray runs a phenomenal program at Tri-Village. He’s got the players, the staff and the program in place and they are going to be tough. Throw in Miami East and they have a strong program traditionally. Covington is going to be good too. Ansonia is going to surprise some teams I think.

“There are some really good coaches out there too,” he continued. “Coach (Jim) Bolin at Ansonia is a good coach who has been around a long time and knows how to get those kids ready. Same with Coach (Chris) Besecker at Bradford. I just think there are some really good coaches in the conference and it is going to be a battle every game. I told the girls it isn’t going to be an easy battle. They are going to have to take it one game at a time and go from there. We’ll make our way through at get ready for tournament by doing that. I’m happy to be in the CCC because of how strong the conference is is just going to make us stronger and get us ready for tournament time. Our non-conference schedule is like Murderer’s Row. You’ve got Versailles, Russia, Fort Recovery. We need to face those tough teams especially on the road because we have to win on the road against tough teams. Everything is in place to make these girls better and stronger.”