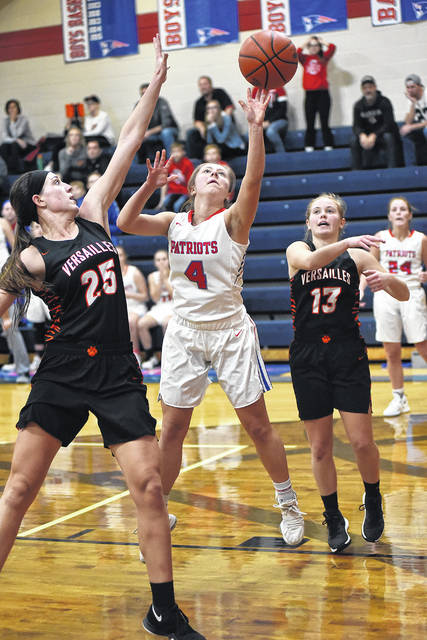 NEW MADISON – The Versailles girls basketball team overcame a 20-point first half deficit and for the second night in a row found a way to win in overtime. The Tigers defeated Tri-Village 58-48 to claim the 31st annual Patriots Bill Burkett Holiday Tournament title for the second year in a row.

“That was a little harder than expected, it’s been a while since we’ve been down 20 points in the first half and had to come back from that,” a relieved Jacki Stonebraker said. “These girls have a lot of fight, very determined and have that will to win and never give up,” she added.

The win should be a memorable one for the Versailles girl’s basketball coach, not only in the way they won it, but it also marks her 300th career win at Versailles.

“Those wins are a direct result of the girls and great athletes who have come through this school, they just know how to win, and I credit them for that. I’m not doing anything but guiding them along,” Stonebraker stated.

Things didn’t look good for the Tigers after trailing 27-12 at the end of the first half.

The Patriots played a near perfect first half both offensively and defensively.

The defense forced 11 turnovers and contested every shot giving up just 12 points to the Tigers while also rebounding the ball effectively.

The offense was also firing on all cylinders with Emma Printz picking up where she left off the night before draining 4 first half 3-pointers to lead the Patriots to the 27-12 lead.

“They were really hot in that first half and our defense couldn’t stop them and Printz went on a run, we couldn’t stop her either,” Stonebraker said.

The second half however would be a different story as Versailles applied relentless pressure and was just more physical at all levels.

They immediately went inside to start the third quarter to Lindsey Winner who scored the first 6 points as the Tigers clawed back into the game.

“Right now, our post players aren’t in game condition or fluid with their moves, but we knew we had some mismatches and in the second half we wanted to make a better effort of getting it inside and attacking the offensive glass. Sometimes our best offense is shooting the ball and getting the rebound for an easy score,” said Stonebraker

Danielle Kunk also got the hot hand scoring 7 points including a big triple at 1:29 in the third quarter and the lead had evaporated to just 3 points for Tri-Village.

The Tigers ended the third quarter trailing by just one 32-31 on a second chance bucket form Brooke Stonebraker and it was a new ball game.

Tri-Village coach Brad Gray could feel the game starting to shift midway as the third quarter.

“Offensively we got out of sorts and we allowed it to affect how we played on the defensive end. Early on our first shot defense was good and our rebounding solid,” Gray stated.

“It just became a snowball effect in the second half when they came out and got a couple easy ones and cut the lead to 11 you could feel our kids start to press a little bit feeling like they had to make a play right away and it just turned into lot of ugly things for us,” Gray added.

Winner gave Versailles its first lead of the game 33-32 to start the fourth quarter and the two teams would trade buckets with the lead switching back and forth until the Tigers held a 44-41 lead at the 1:34 mark.

Madison Fourman would cut the lead to one 44-43 on a left-handed shot in the lane, but Kunk answered for Versailles with 2 free throws to go back up 46-43 with 13 seconds left in regulation.

Tri-Village had one last chance and found Lissa Siler in the deep corner and she would drain the high arching shot to tie the game as the horn sounded to send the game into overtime.

“Lissa Siler made a big shot in the corner to tie it to send to overtime, we know she’s a great player and when she gets a hot-hand she is tough to stop. She couldn’t get it going early, but she hit the shot when it really mattered. I thought we had it covered pretty good, but she stepped back and made it,” said Stonebraker.

Tri-Village freshman Meghan Downing fouled out in the fourth quarter and without her in the paint the Patriots were at a disadvantage in the overtime period. That is where senior post player Elizabeth Ording came up big scoring 7 points as the Tigers pulled away to win the Bill Burkett championship by the score of 58-48.

“I’m really proud of the effort from Elizabeth Ording especially in the fourth quarter and overtime period. She went from being really sick and puking a few days ago to gutting it out tonight and came up big in overtime,” praised Stonebraker.

With such a big lead and playing so well in the first half only to see it slip away was frustrating for coach Gray, who was looking for something positive to take away from it.

“A loss like this hurts but there were positives to take away from the game. If we can find a way to do what we did in the first half and make it a consistent thing and not fold when we face physical pressure, then that’s a positive,” Gray stated.

“We said all along the game would be won on the glass and that’s where it was won, we gave them way too many second and third opportunities in the second half,” Gray commented

“We’ve struggled with teams who have great physicality and crash the boards hard, it’s been our Achilles heel and until we fix that it’s going to be hard for us to beat teams like Versailles,” Gray concluded.

For Stonebraker and Versailles it was just another game where they found a way to win.

“You can’t get to the peak without going through the valley, but the girls are winners and they just kept fighting,” Stonebraker concluded.

And that is the formula for Stonebraker on how she has won 300 games.

Versailles’ Winner was named the Bill Burkett MVP and joining her all the tournament team were teammates Caitlin McEldowney, Danielle Kunk, Emma Printz and Lissa Siler of Tri-Village and Jordyn Varise from Chaminade Julienne. 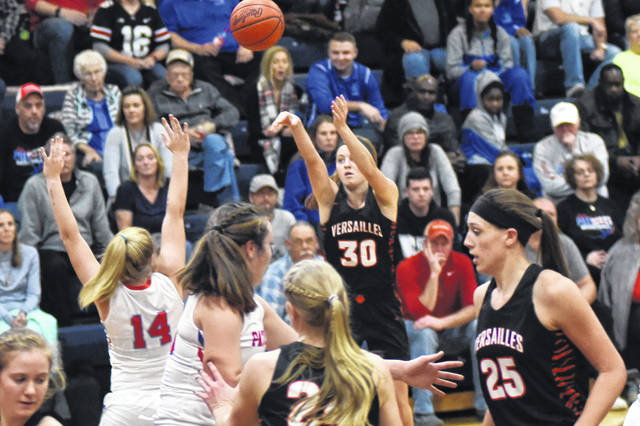 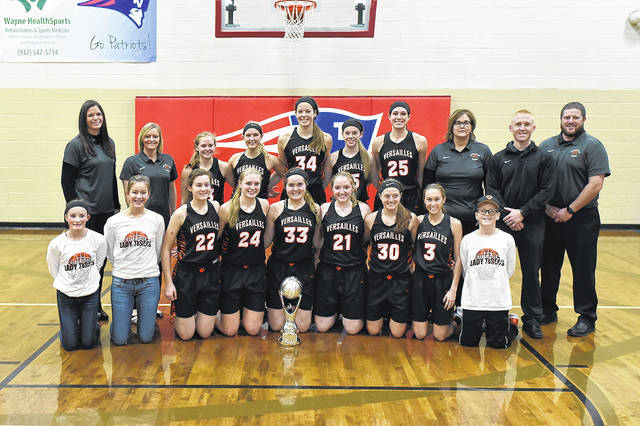 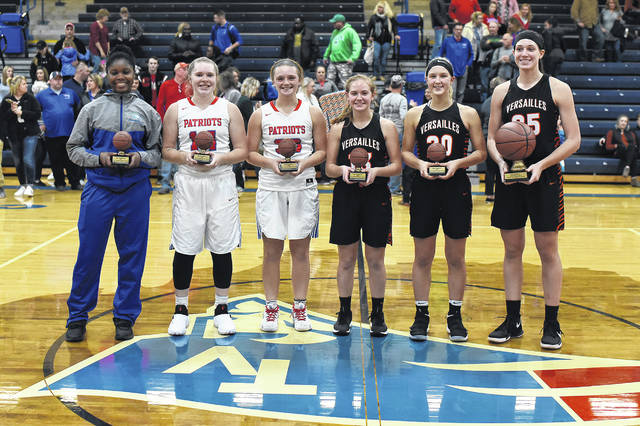 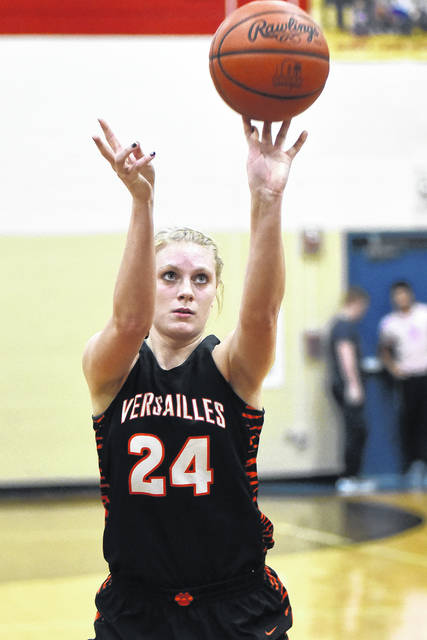 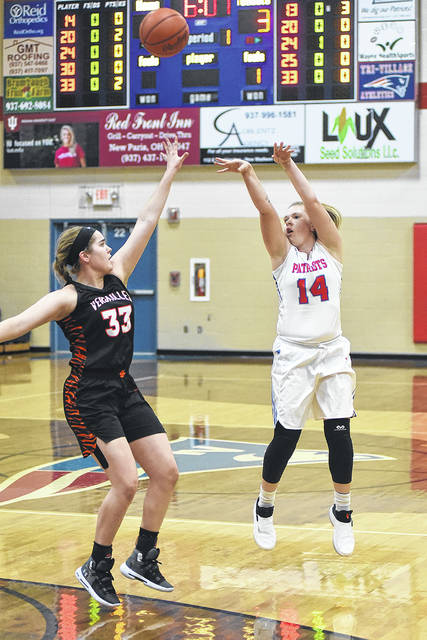 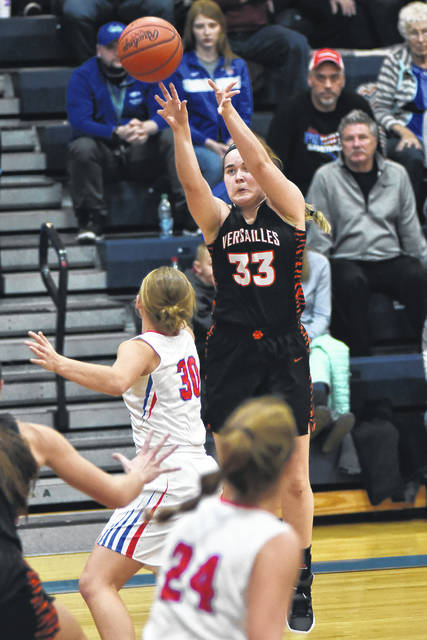 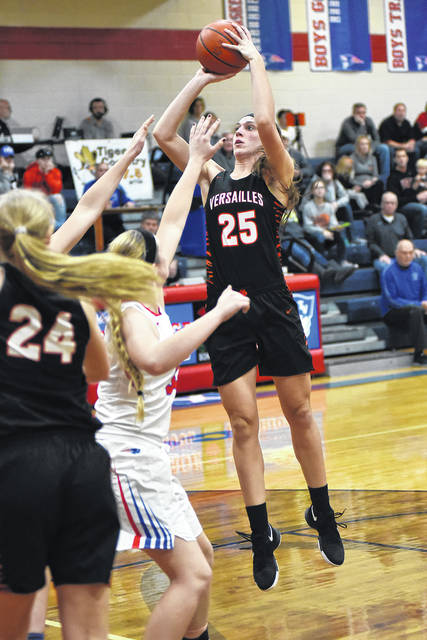 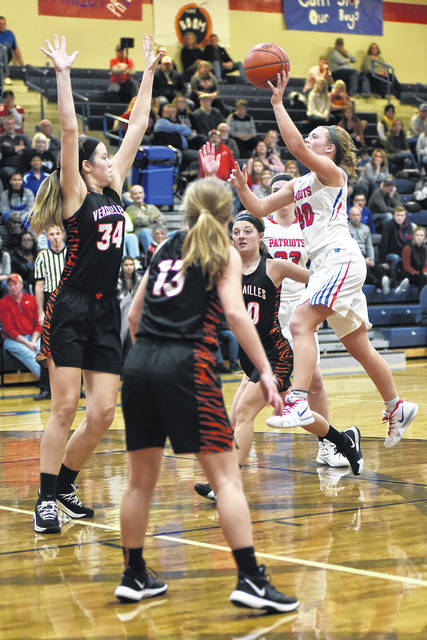 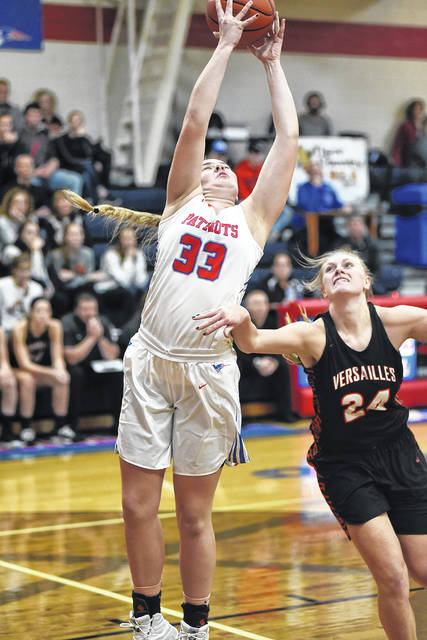