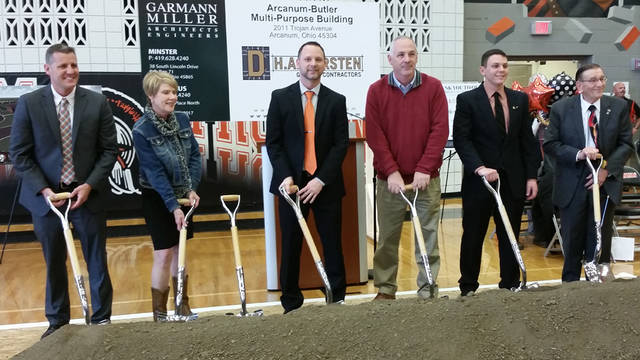 ARCANUM – After a year of planning and raising more than $1 million, Arcanum-Butler Schools held a groundbreaking ceremony Friday for its 19,000- square-foot Multipurpose Agriculture and Athletic Building.

Superintendent John Stephans welcomed the entire student body and staff as well as several elected officials and school business partners to the ceremony, calling it a “momentous occasion.”

“And thank you to all of you who donated in our community who generously donated anywhere from $50 to $250. Your donation is appreciated,” Stephans said. “The groundbreaking ceremony this afternoon marks the commencement of construction for additional educational and athletic space that will positively impact the students, staff and Arcanum-Butler community.”

Stephens also said the new facility will “greatly enhance our ability to provide hands-on learning opportunities and experiences for our students and supports agricultural education that can have a larger impact for our community, region and state.”

Powell said the opportunity to speak to the entire Arcanum-Butler student body was a “dream come true.”

Growing up near Arcanum on a 2,000-acre family farm, Powell said, generated “some of my greatest memories,” which included driving semis and tractors and showing sheep at the Great Darke County Fair.

Powell urged the students to “take advantage” of their new ag ed building.

Buchy said he thought it was appropriate the groundbreaking ceremony was being held on the Ides of March, giving the crowd a little history lesson.

March 15 – Ides of March – was the day the Romans had set for settling their debts, Buchy explained, noting how the support from community and business partners had made it possible for the new building to be paid for when students walk in the first day.

“You are building a facility to continue the growth of the No. 1 business in the county,” Buchy said of the county’s rich agriculture history.

The district is working with Garmann Miller Architects to construct the facility, which will feature FFA classrooms, lab and greenhouse. There’s also space for additional storage and athletic facilities, including a weight room. A community room also is planned. 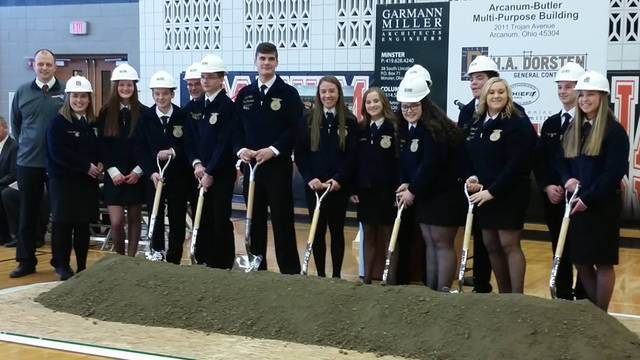