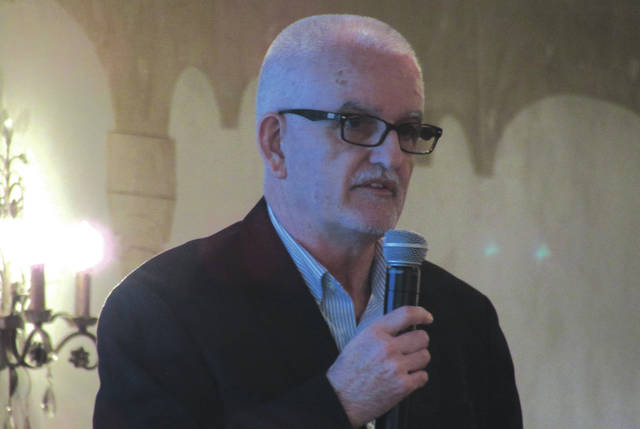 “Agriculture is one of our county’s greatest assets,” Walls said, echoing the words of former chairman Tony Roberts during last year’s ceremony. “Not only do we rely on agriculture for our food, feed, fiber and fuel, but our farmers preserve our environment and drive our local economy.”

“Agriculture provides almost everything we eat, use and wear on a daily basis, and we owe a debt of gratitude to the hard-working men and women who provide us, and much of the world, with a safe, reliable, affordable and abundant food supply,” Walls continued.

“I felt like I was an Olympic torch bearer,” Riffle said of his time as fair manager. “As long as I held the flame, I wasn’t going to let it go out.”

Riffle also spoke a bit about his community service endeavours.

“You do things in the community not because you want pats on the back but because it’s the right thing to do,” Riffle said.

The 2019 Agricultural Achievement Award was presented to Andersons Marathon Ethanol Plant in Greenville.

Ohio State University Chair of Agricultural Marketing, Trade and Policy Ian Sheldon was the primary guest speaker at Friday’s event. Sheldon discussed how escalating tensions between the United States and China could affect Ohio’s economy, as well as the prospects of Ohio’s farmers.

“This is the closest we’ve come to a trade war since the 1930s,” Sheldon said. “Since around the time of the Great Depression.”

Retaliatory tariffs placed on American imports by the Chinese, Sheldon said, have resulted in the U.S. losing a significant portion of its market share in sorgum, wheat and soy bean exports to countries such as Australia, Canada and Brazil.

“I believe the Chinese picked these industries so that people in regions like Darke County would put pressure on the president,” Sheldon said.

According to Sheldon, some economists predict that any gains to the U.S. from its recent renegotiation of the North American Free Trade Agreement will be “wiped out” by the costs of the trade war with China. Sheldon also thinks a desire to reduce the trade deficit is what is driving recent changes to U.S. trade policy … a strategy Sheldon and other economists do not think will be successful.

“We’ve been running a deficit since the 1970s,” Sheldon said. “You’re not going to change that with trade policy.”

Sheldon thinks there’s a 40 percent chance the U.S. will experience another recession within the next 24 months, in large part due to these trade-related concerns.