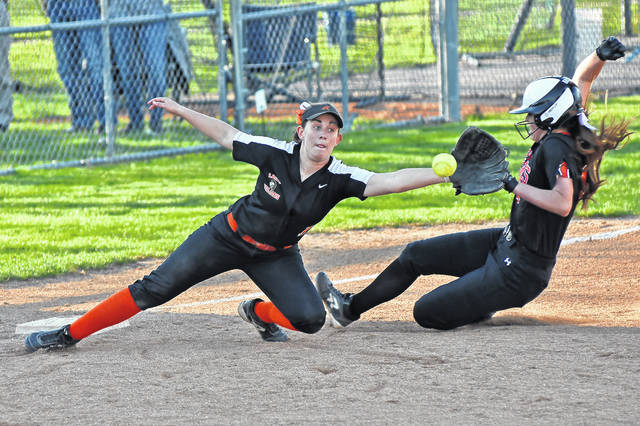 VERSAILLES – It was a showdown between two conference front running teams; Versailles Tigers who are undefeated in the MAC and Arcanum with just one loss in the CCC.

It was a game that featured a couple big innings for each team with Versailles jumping out on top early going up 4-0 after two innings. Faith Huddle got the scoring started for Versailles on a double. But Arcanum rallied back to tie the game a 4 in the top of the 3rd inning.

Arcanum then went up 5-4 in the top of the 5th inning only to see Versailles retake the lead 6-5 in the bottom of the 6th. Arcanum though had a big 7th inning scoring 6 runs and then held on for an exciting 11-7 win over the Tigers.

Each team had 11 hits in the contest … but Versailles had 6 errors to 3 for Arcanum.

Kaylee Wilcox went 3-5 at the plate, Camille Pohl was 2-4 with 3 rbi’s, Sydney Artz and Peyton Garbig each went 2-5 with Artz also adding a rbi. Macey Hartman was 1-3 with 1 rbi and Gracie Garno went 1-5 and produced 4 big runs.

Versailles Abby Stammen and Caitlin McEldowney led the Tigers registering 3 hits each. Caitlyn Luthman had a hit and rbi, Tara Fritscher hit a double, Faith Huddle had a double and a rbi and Hannah Barga and Natalie Prenger each had a hit as well.

Lauren Monnin took the loss on the mound for Versailles and Macy Skelton got the win for Arcanum going 5 innings.

With Arcanum taking a 5-4 lead Versailles rallied in the bottom of the 6th inning the Tigers tied it up and 5 each when Abby Stammen on a full count singled in the go ahead run to go up 6-5 heading into the last inning.

Arcanum answered the bell producing 6 runs in their final at bat. Camille Pohl singled on a 2-0 count to score two runs and then Gracie Garno smashed a bases loaded triple to clear the bases producing 3 runs as the Trojans took an 11-6 lead into the bottom of the inning where they would hold to earn the 11-7 win.

Versailles softball coach Chris Floyd knew it was going to be a tough game and a tough week and wants to get his team back on track after the loss to Arcanum.

“We lost our focus … we were in a good stride as a team, then got rained out Friday and then a doubleheader on Saturday, then throw in Easter and with a young team it’s easy to lose focus. We have Minster tomorrow who is undefeated in the league and #1 in the state and I don’t want to say we overlooked them (Arcanum) because they are a well-coached team and very good, but we were just flat as a team. We’ve battled Arcanum before, they owned us last year, the year before we got them and it’s always going to be this way with us and them.” Floyd said.

“When we play it’s a flip of the coin and that’s the way the game went tonight. I saw some good things. I had two freshmen come off the bench and got hits and that’s huge.

Tara Fritscher and Natalie Prenger have seen many pitches … but they came up big and we are going to need everybody,” Floyd praised.

“To play a team like Arcanum you have to play a complete game. We made some nice plays in the field but also bobbled a few and that will cost you. We just need to get back to where we were and get our momentum back,” Floyd concluded.

Arcanum softball coach Rick Stone wasn’t pleased with the way his team started the game but was really happy with the way they finished.

“We made some mistakes to start the game, we started slow and Versailles capitalized off our mistakes,” Stone said

“We were fortunate enough to start hitting the ball a little bit and then they made a couple of mistakes that got us back into the game,” Stone commented.

“Hats off to Versailles they came back to take the lead in the bottom of the 6th inning but we came to the plate relaxed and hit the ball and fortunately we were able to produce a lot of runs in the final inning and get the win tonight,” Stone added.

“Our kids never feel like they are out of a game, they know they didn’t play their best game, but Versailles didn’t either … we are two very good ball teams or if we played 10 times, we probably be 5-5 it just depends on who’s day it is. I’ve got a lot of respect for them.” Stone stated.

“We had a nice play by our 3rd baseman Macy Hartman in the bottom of the 6th inning when she laid out for that line drive to hold them to just a 1 run lead going into the last inning. For some reason every game we play it takes a good defensive play to get us excited and I just wish it would have happened sooner rather than later. Our defense then carried over to the other side of the game and the girls relaxed and hit the ball well in their final at bat.” Stone concluded.

Versailles falls to 7-6 overall but is 4-0 in the MAC a will play 4-0 Minster Tuesday night. 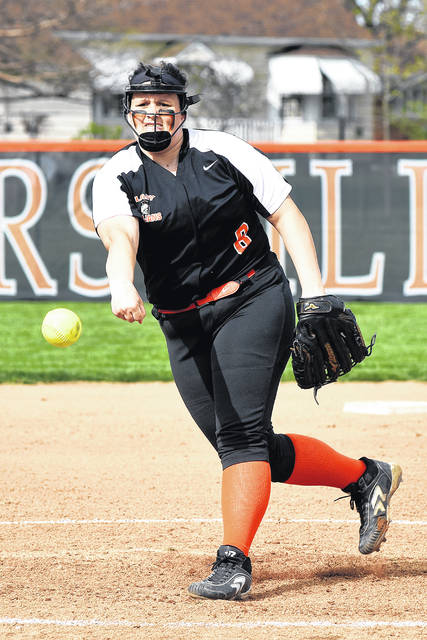 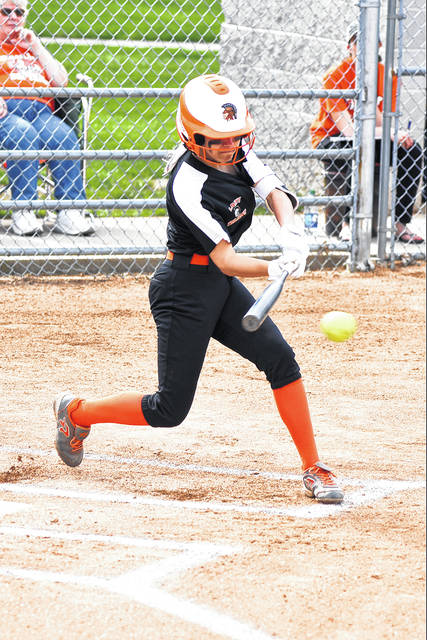 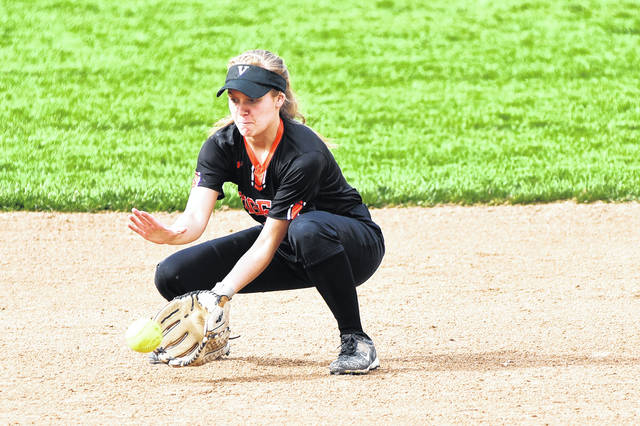 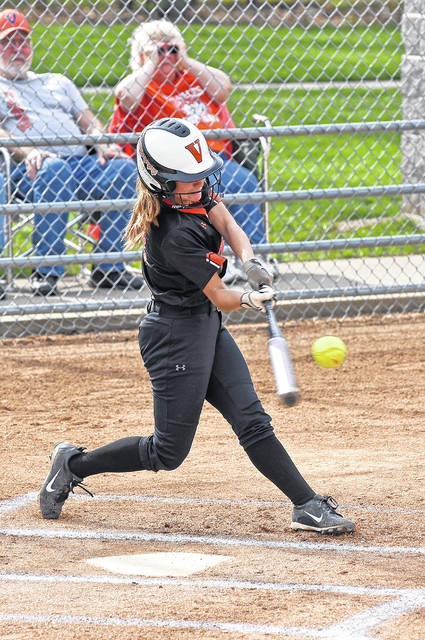 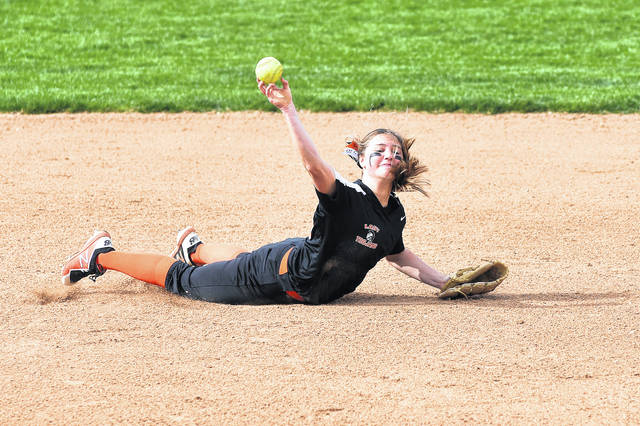 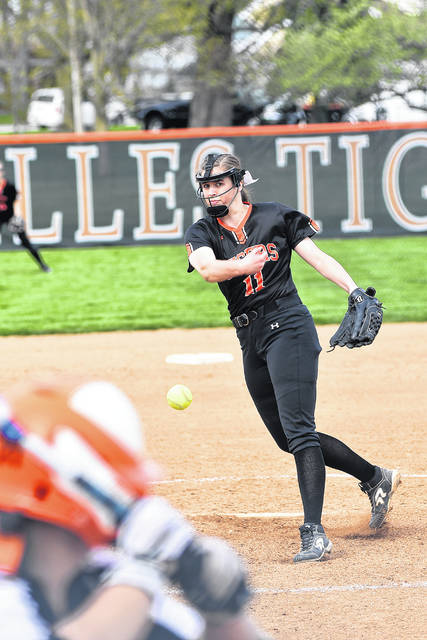 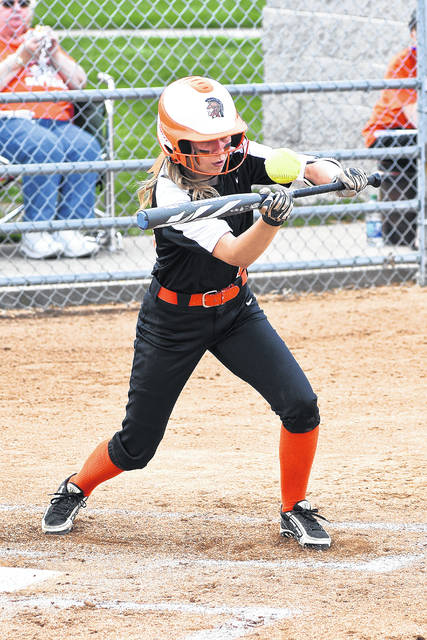 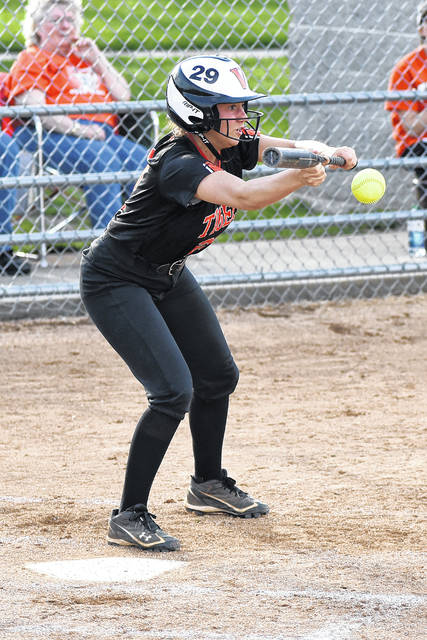 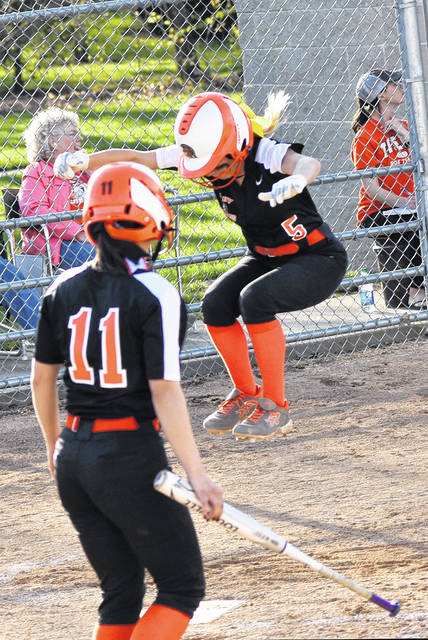 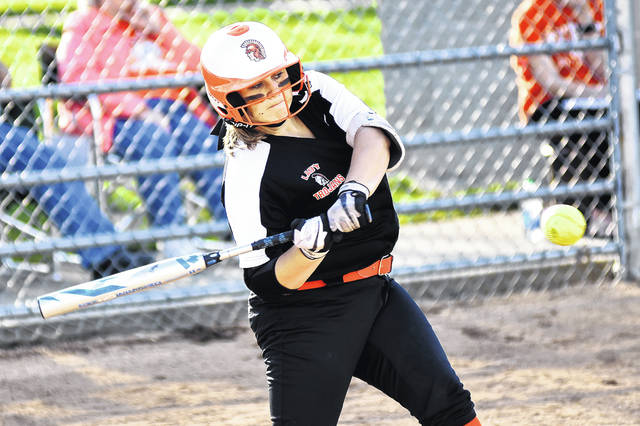 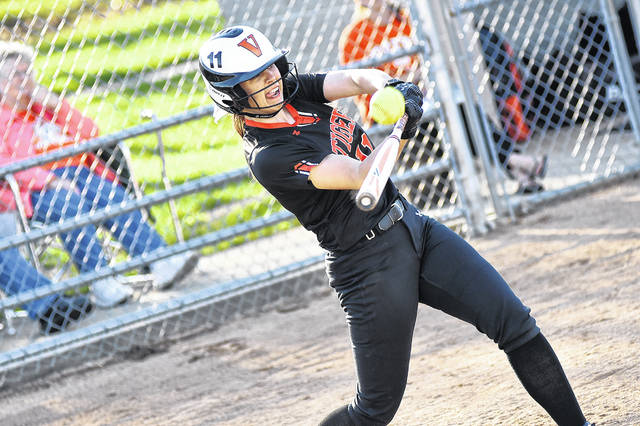