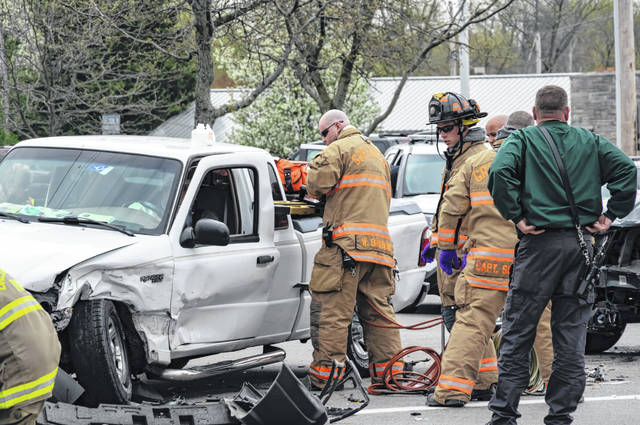 GREENVILLE- A two-vehicle injury accident Tuesday afternoon resulted in three people being transported to the hospital.

At approximately 3 p.m., emergency personnel from Greenville City Fire Department, Greenville Township Rescue and mutual aid from Gettysburg Rescue along with officers from the Greenville Police Department were dispatched to the intersection of Wagner Avenue and East Main Street on the report of an injury accident with possible entrapment.

According to the Greenville Police Department, preliminary investigations into the incident have revealed that a green Jeep Grand Cherokee was traveling southbound on Wagner Avenue when the driver attempted a left-hand turn onto East Main Street, pulling into the path of a north bound white Ford Ranger causing a collision between the two vehicles.

Drivers of both vehicles gave conflicting information to officers at the scene stating that they each believed they had the green light.

The elderly male driver of the Ford Ranger had to be mechanically extricated from his vehicle by Greenville City Fire Department before being treated on the scene by Greenville Township Rescue and transported to Wayne HealthCare for his injuries.

The female passenger of the Ford also was treated at the scene by Greenville Township Rescue and transported to Wayne HealthCare.

The male teenage driver of the Jeep was evaluated on the scene by Gettysburg Rescue and transported to Wayne HealthCare for further evaluation.