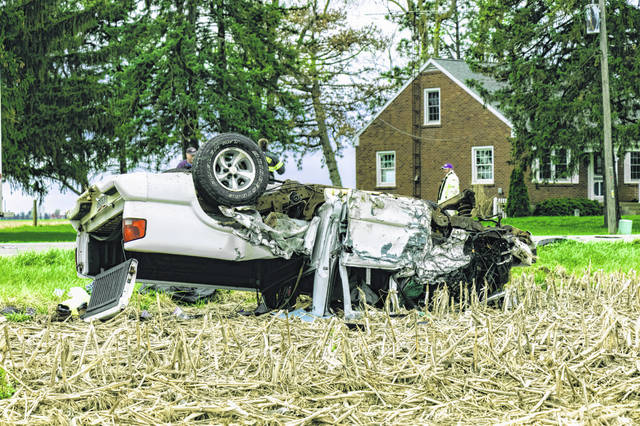 ARCANUM – A driver was transported by CareFlight Wednesday morning after being ejected from his vehicle following a head-on collision.

At approximately 9:56 a.m., emergency personnel from Pitsburg Fire Department, Arcanum Fire and Rescue, CareFlight from Miami Valley Hospital as well deputies from the Darke County Sheriff’s Department were dispatched to the area of State Route 49 South and Grubbs-Rex Road on the report of a two-vehicle injury accident in which one vehicle rolled ejecting the driver.

According to the Darke County Sheriff’s Department, a white 1997 Chevy S10, driven by 35-year-old Denville Boeske of Greenville, was traveling southbound on State Route 49 South when it crossed left of center causing a head-on collision with a northbound white 2017 Ford Transit van, driven by 26-year-old Adam Martin of Greenville.

The Chevy truck continued off the left side of the roadway, rolling at least once, before coming to rest in a field.

Boeske, the sole occupant of the Chevy truck, was ejected from his vehicle as a result of the accident. He was treated on the scene by Arcanum Rescue prior to being transported to Miami Valley Hospital by CareFlight, for non-life threatening injuries.

Martin, also the sole occupant of the Ford van, was treated on the scene for his injuries and transported to Miami Valley North by Arcanum Rescue.