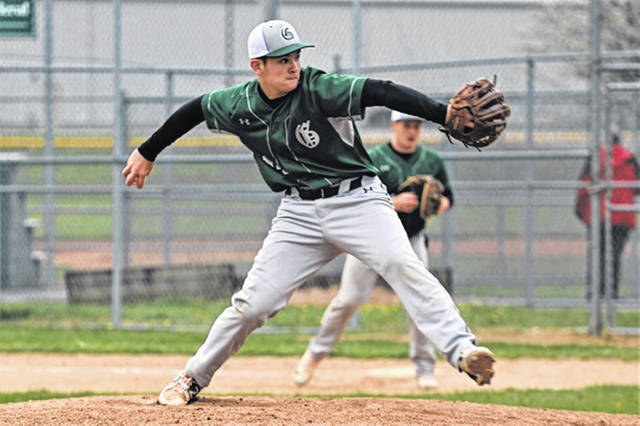 GREENIVLLE – The Greenville varsity baseball team defeated the Trotwood-Madison Rams 14-3 Wednesday night with Greenville coach Eric Blumenstock going to his junior varsity squad to do the pitching and going to the JV players to play the second half of the 4.5 inning run rule game.

“A sophomore, Kole Francis threw most of the game tonight and did a nice job,” said Greenville coach Eric Blumenstock. “He threw strikes. That is what we need when we play Trotwood.”

Wave control problems on the mound to open play had the visitors taking advantage of four opening walks to plate a run before Coach Blumenstock would go to Kole Francis with one out in the first to take over pitching duties.

Greenville plated two runs in the bottom of the first only to have the Rams come back with a run in the top of the second to even the score at 2-2.

The Wave struck for six second inning runs to lead 8-2 after two complete and added a single run in the bottom of the third.

Greenville scored five in the bottom of the fourth to lead 14-3 in what would be the Green Wave’s final at bat with an 11 run advantage.

Francis struck out the side in the top of the fifth to give Greenville a run rule win in what will be the last game the two teams will meet with the teams going separate ways in the future with the changes in both teams joining new leagues in the 2019-2020 season.

“You try to keep it respectful as much as possible when we play Trotwood,” said Blumenstock. “We’re just out there having fun with these guys – good guys over there in Trotwood.”

“Probably will be the last time we will every play Trotwood unless we get them in the tournament at some point with us switching out of the GWOC and going to the MVL (Miami Valley League),” Blumenstock said. May never see it happen again.”

Tyler Beyke paced Greenville going 2-3 with a RBI and 2-runs scored before being lifted for younger Green Wave players. Byeke currently holds down fifth place in the entire GWOC with a .532 batting average.

Tytan Grote was 1-2 with a RBI, Tony Sells 1-1 with a RBI and both Cameron Fletcher and Terry Miller had a walk and scored a run.

Kole Francis was 1-2 with a walk and a run and Alex Kolb went 1-1 with a run scored.

Francis earned the win for Greenville pitching 4.2 innings of one earned run while giving three hits, striking out 10 Trotwood-Madison batters and walking one.

The Wave battle through a five game skid playing through the heart of the GWOC schedule to earn their third consecutive GWOC win and improve to 7-9 on the season and 5-6 in conference play.

“We knew coming in we were going to play the best three teams in the GWOC and that’s just how it is, that’s how the schedule is set up,” concluded Blumenstock. “We did better this year than we did last year…and being as young as we are that’s a good thing moving forward.”