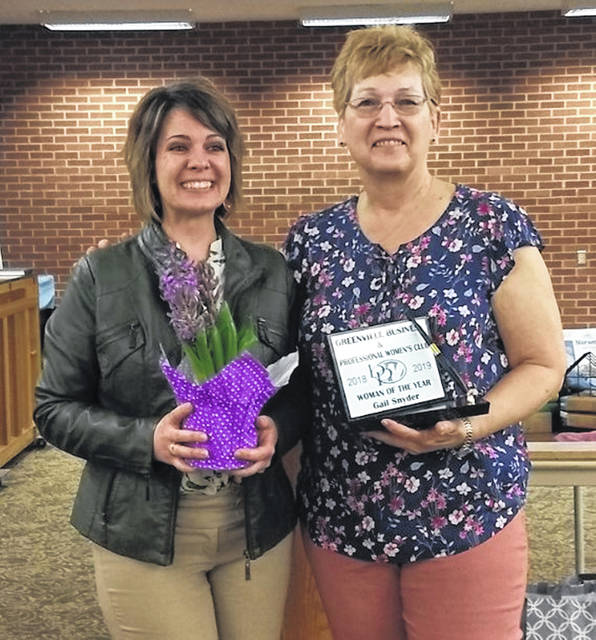 GREENVILLE – The Greenville Business & Professional Women’s (BPW) Club is proud to announce that Gail Snyder has been named the club’s Woman of the Year.

BPW Secretary Sonya Crist announced the Woman of the Year vote was close this year, “We have such fabulous women! The ultimate winner so deserves this award.” Some of the comments about Snyder on the ballots were: She has been very active through the years in community organizations and the BPW club. She is also involved with higher levels of BPW, which shows passion for the cause. She is very kind and caring of others. Gail currently holds the position of Ohio/BPW Vice President for the state of Ohio.

Snyder stated, “I am so honored to be named Woman of the Year. I joined BPW in 1985. When I joined I understood it was only for managers or owners of businesses. That attitude has definitely changed. Now we as BPW members are more geared to all women in the workplace and are a wonderful networking tool. I joined with networking with business minded women in mind. I also believe in the need for women to help guide other women. I met wonderful role models such as Sheryl Brinley who was also one of my great friends. She was very influential in my life. My intention of joining BPW was to meet other women that I could learn from. The projects that all of our BPW sisters continue to support in the community are so rewarding to me and all our members.”

Snyder has been active in the BPW state, regional and local clubs and will be contributing to the state conference this year with signs, vendors and helping with the goodie bags. As BPW state vice-president, Gail will assist the state president with her needs at the conference. She is currently serving as Darke County Central Committee member and worked the election polls in the past. She serves now as president of the VFW Auxiliary and was just re-elected. Gail does artwork out of her home and has some paintings hanging at Wayne HealthCare in Greenville.

The club presented an engraved award and flowers to Gail to honor and thank her for her time, hard work and support to the local club. Snyder received her award at the monthly dinner meeting held on April 11 at Brethren Retirement Community.

They challenge and invite any woman with an interest in learning about Greenville BPW, networking, and community service with a heart for innovation in the realm of today’s professional women to join them. Contact Membership Chair Sonya Crist at 937/423-3657 or [email protected] for updates on meetings or check the Greenville BPW Club Facebook page.