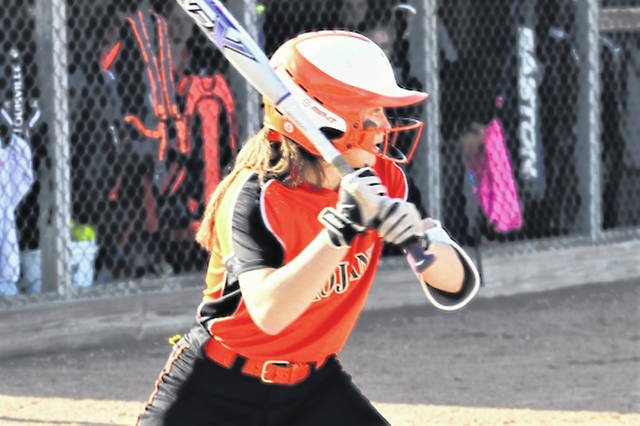 ARCANUM- The Arcanum Lady Trojans carried a 16-1 record into Tuesday afternoon’s non-league softball game. This would not be the usual lineup used by coach Rick Stone and the Lady Trojans would gain some valuable experience, but not the victory as Eaton defeated Arcanum 10-4.

The Lady Trojans turned to freshmen Peyton Garbig and Ellie Fout to pitch against the Lady Eagles.

“I told our number one (pitcher) that she wasn’t going to play at all,” said Arcanum Coach Stone. “Win or lose the freshmen were going to grow up tonight. Thought they pitched well. Just couldn’t get control of that second or third pitch. Made them battle through tonight.”

Eaton got on the scoreboard first as E. Dungan deposited Garbig’s first pitch over the fence giving the Eagles a 1-0 lead, but the Arcanum hurler quickly regained her composure and got out of the inning.

The Lady Trojans put together what would be their only scoring frame of the contest in the bottom of the first. A one out double by Camile Pohl was followed by a walk to Gracie Garno. After two were out Macey Hartman doubled in a run. Continuing the two rally were a single by Garbig and a two-run double by Eva Siculan. After one inning Arcanum led 4-1.

That was the high water mark for the Lady Trojans. The Lady Eagles put up a 5 spot in the top of the third, highlighted by a L. Miller three-run homer to right. Eaton would add two runs each in the sixth and seventh to make the final score 10-4.

“They learned a lot tonight,” said Coach Stone. “We score four runs in the first inning. We hit that pitcher. She’s supposedly one of the better pitchers in the area. We hit her hard all night long. We hit the ball to them…They hit it further.”

Stone commented, “Eaton’s a good ball team who has been playing real good here of late. We’ve beaten teams that have beat them. I knew that we could hang with them. The freshmen learned a lot tonight on the mound. They learned you have to have more control of your pitches and learned you can’t just throw fast balls down the middle of the plate, or good teams are going to hit you.”

Arcanum falls to 16-2 on the season. The Lady Trojans are seeded number three in the upcoming OHSAA tournament which begins Monday, May 6 when they host West Milton.