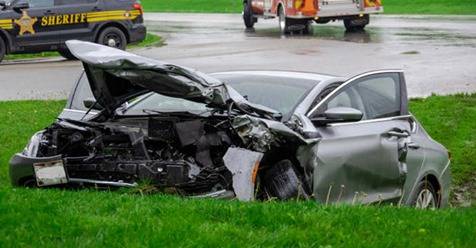 GREENVILLE — U.S. Route 36 East was closed for nearly an hour after a two-vehicle accident left three people being transported to the hospital for their injuries.

At approximately 3:25 p.m., emergency personnel from Grenville Township Fire and Rescue along with deputies from the Darke County Sheriff’s Department were dispatched to the intersection of US Route 36 East and Jaysville St. Johns Road in regards to a two-vehicle accident with possible entrapment.

According to the Darke County Sheriff’s Department, preliminary investigations into the accident have revealed a grey Ford F150, driven by 23-year-old Colton Nealeigh of Greenville, was traveling northbound on Jaysville St. Johns Road when he failed to yield to oncoming traffic pulling into the path of a westbound silver Chrysler 200, driven by 58-year-old Grace Arnett of Greenville, causing the two vehicles to collide. The Chrysler 200 traveled off the right side of the roadway coming to rest in a ditch.