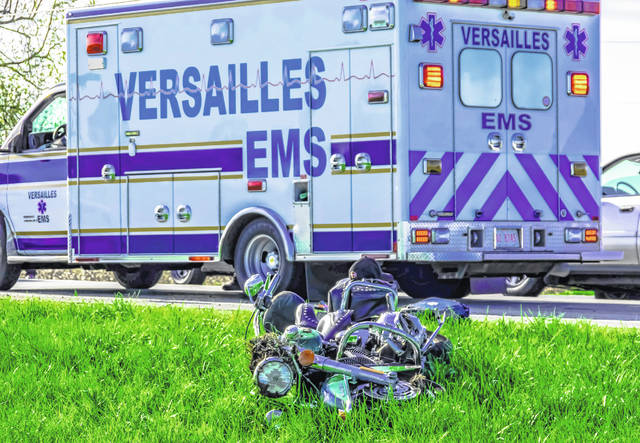 VERSAILLES – A motorcycle accident on the outskirts of Versailles Sunday evening resulted in the motorcyclist being transported to the hospital for their injuries. At approximately 6 p.m., emergency personnel from Versailles Fire and Rescue were dispatched to the intersection of State Route 47 and Conover Road in regards to a vehicle versus motorcycle accident.

According to the Darke County Sheriff’s Department, a preliminary investigation into the accident has revealed that a white Honda Accord was travelling northbound on Conover Road when it stopped at the stop sign and attempted to make a left-hand turn west onto State Route 47. The driver failed to yield to oncoming traffic pulling out into the path of an eastbound green Heritage Softail Harley-Davidson motorcycle, which caused the two vehicles to collide. The rider of the Harley-Davidson, who was not wearing a helmet at the time of the accident, travelled off the right side of the roadway coming to rest in a ditch.

The male rider of the Harley-Davidson was treated on the scene by Versailles Rescue before being transported to Wayne HealthCare for his injuries. The Female driver of the Honda was uninjured in the accident.