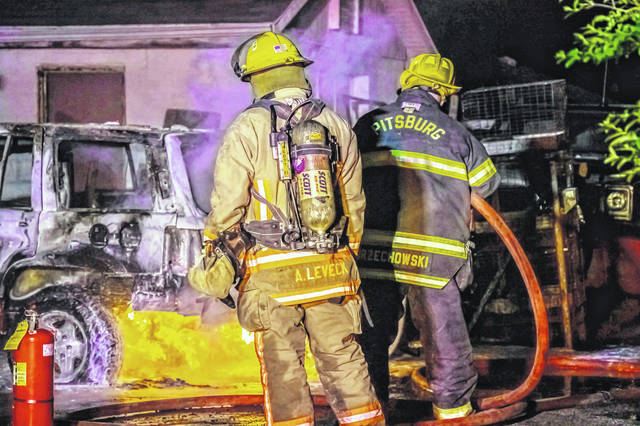 ARCANUM – The second of two suspicious fires in Darke County in a single evening is being investigated by the Arcanum Fire Department. At approximately 3 a.m., emergency personnel from Arcanum and Pitsburg Fire Departments, as well as Arcanum Rescue along with deputies from the Darke County Sheriff’s Department, responded to 405 West Second Street to the report of a vehicle fire in close proximity to a structure.

Arriving crews found a fully involved vehicle fire with heavy smoke and flames showing within feet of an attached garage. According to Arcanum Fire Department’s Assistant Fire Chief Mark Gibson, the fire was able to be contained to a 1997 Jeep Grand Cherokee keeping damage to the surrounding exposures to a minimum.

“The damage to the structure and the surrounding vehicles is very minimal,” he stated. “The garage is constructed with cinder blocks, if it wasn’t we would have most likely lost it too. Because we know the vehicle had been sitting for an extended period of time and had no battery or any other ignition source to cause a spark, the incident is suspicious in nature,” he added.

The cause and origin of the fire are unknown at this time, however the fire is considered to be suspicious in nature. The fire will remain under investigation by the Arcanum Fire Department.