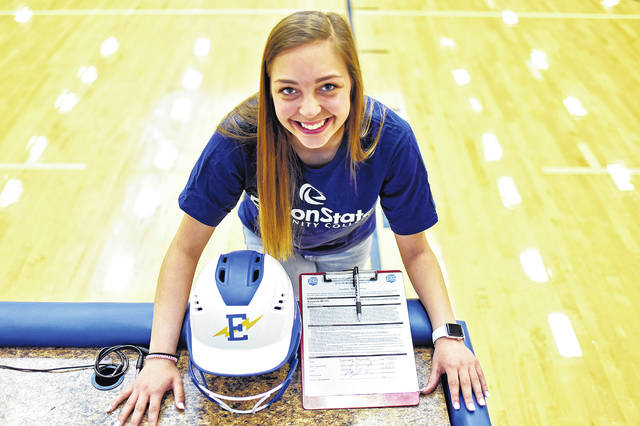 PITSBURG – It was a good day for Franklin Monroe senior Kennedy Morris as she signed her letter of intent to play softball at the next level at Edison State Community College.

Kennedy was a 3 year starter for the Jets and was the leading hitter on the team the last 3 seasons … but she was unable to play her senior year after suffering a season ending injury in basketball.

She didn’t need her senior year to prove her ability to play softball as Kennedy had already made an impression on Edison State coach Dan Cain who had seen her play a few summers ago and immediately recognized her talents.

“A few years ago, I was coaching some travel ball and I knew coach Mike Morris, so we picked up Kennedy to play for a couple of weekends. Even though I didn’t have the job as Edison’s coach at the time, I knew she was a kid who could play at another level. When Edison gave me the job, I immediately gave her a card and told her when she was ready to make a decision let me know. A few years later she still had the card and she gave me a call,” coach Cain said.

Franklin Monroe has had a lot of success on the softball diamond over the last 4 years with Kennedy and her older sister Emily being a big part of the teams District title and Regional run a few years ago. That success has continued this year as the team is 17-7 on the year so far and poised to make another nice tournament run.

Sports has been a family affair for the Morris family and in the blood going all the way back to grandpa Gene Morris who coached all 3 of his sons who all continued his passion for sports coaching themselves.

“I’m real proud of my 3 boys as all of them have been involved in coaching. Scott is my oldest and coached Jr. High Basketball at Arcanum for a few years and Doug my middle son coached football as an assistant at Arcanum for several years and Mike baseball and now softball at Franklin Monroe. I’m just extremely proud they all have stuck with sports in some way,” Gene Morris complimented.

Mike is the head coach at Franklin Monroe and is proud to have reached 100 wins this year as a softball coach for the Jets. Something many never thought could be done when he took the job. He is extremely proud of his two daughters Emily and Kennedy who have come through the program.

“I’ve coached Kennedy all the way from coach pitch on up and it’s always been something I’ve dreamed about that one of my kids would play at the next level. She’s definitely put the time in and worked hard on her game in summers and now she’s working out trying to get back in shape to recover from her injury. I know it was a bad deal not getting to play her senior year … but we are looking forward to seeing her continue playing next year and I hope she really enjoys it,” Mike stated.

Gene has been thankful to play a small part and being involved as his granddaughters came through the ranks.

“It’s been a real pleasure to help coach both Emily and Kennedy, both bought into being pushed somewhat … they were told how to play the game and expected to do the right things. I’m really proud of Kennedy because she just plays the game. You can’t tell if she’s having a good or bad game. Whether it was volleyball, basketball or softball, she just stays even keel and that’s difficult for a lot of kids. There is just a determination and not all kids would be able to take the pushing and encouragement we gave them, and they responded to it.” Gene commented.

Still it has been a tough season not only for Kennedy and her teammates but also for Gene, Mike and her mom Amanda as well, to not seeing her out on the diamond this year.

Amanda is excited for her daughter and the chance to see her play again.

“Kennedy doesn’t really have anything to prove on the field as she has already accomplished a lot in her career and done well academically in school … but softball is something she has always been passionate about since she was little and I remember when they won the world series tournament at 8 years old and the trophy was bigger than she was … but that was the start to her loving the game. That drive is still in her and I think for her she wants to prove to herself she can play at the next level,” said mom Amanda.

“I felt really bad for Kennedy missing her senior year and even though it was disappointing, it is very exciting to see her signing to play at Edison State and getting to play at least one more year and we’ll see what happens after that,” Amanda added.

For Kennedy it really is about redemption in her mind to rehab and play again.

“Not getting to play my senior year, this means a lot to me getting to play at least one more year and I look at this opportunity to make a comeback and I’m working hard on my therapy and it’s going really good right now,” Kennedy stated.

But she is going to miss playing for her dad and her family … but also is thankful she has support from a large family and is playing close to home where they all can come out and watch.

“It’s going to be a little strange playing for someone other than my dad because he’s coached me so long. Plus, he’s really a hard coach … he’s really pushed me and my sisters not that it’s been a bad thing, it’s been a good thing for us. I’ve played for other coaches in other sports in the summer and they aren’t as demanding or push me as much as my dad did. I’m really excited to play for coach Cain because I know he’s a really good coach and I had a chance to sub for him on one of his summer teams a few years back and got to see that he was a good coach,” Kennedy added.

Coach Cain knows what kind of quality kid he’s getting and the type of family support she has.

“We focus on area kids, it’s a nice place for them to come and get a couple years of education and get some money to help them out. In Kennedy’s case she’s getting full tuition so you can’t beat that, plus we have what she wants academically, and we’re really pleased she will be joining us,” Cain said.

“The girl can play and is a coach’s daughter, she is a hitter, can defend, run the bases, just and all around athletic kid. She is a super nice kid who comes from a good family and is exactly what I’m looking for at Edison State. The good thing about being the coach at Edison State is I get to pick who I want, and bring in good kids, from good families. It was an awesome year four us, we had a lot of tears after our last game with all the time we spent together and the success we had this season, and everyone enjoyed it. So, it will be a good experience for Kennedy, I look for her to come in and if healthy be my shortstop, and of course she’ll have fun,” Cain concluded.

When Kennedy went down with her injury back on senior night in basketball things didn’t look good … but Grandpa Morris summed it up best.

“We all were devastated when Kennedy went down … everything was kind of upbeat, up to the point of injury. Grandma and I went home that night – we kind of moaned and groaned and finally said – hey there’s kids out there with cancer and stuff like that – so we have a lot to still be thankful for,” grandpa stated.

“This is so special to us and we all feel blessed she has this opportunity and now it’s up to her to make the most out of it,” Grandpa Morris said.

With the support of her family and the drive Kennedy has, that second chance won’t go to waste. 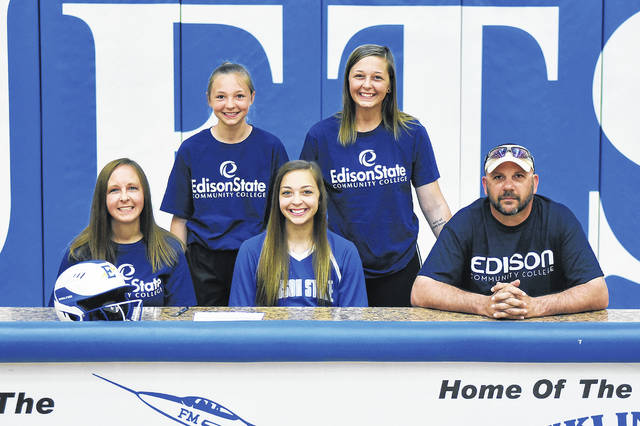 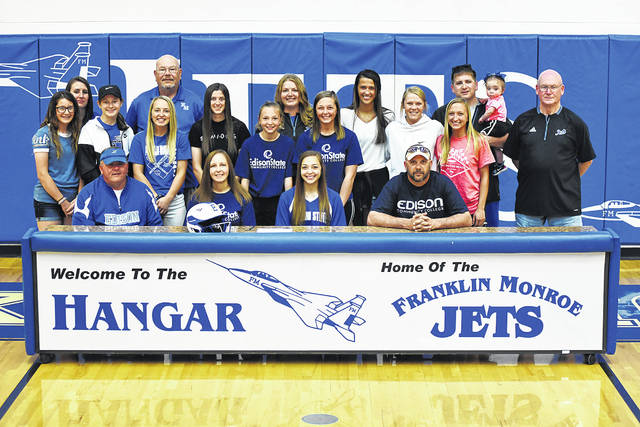 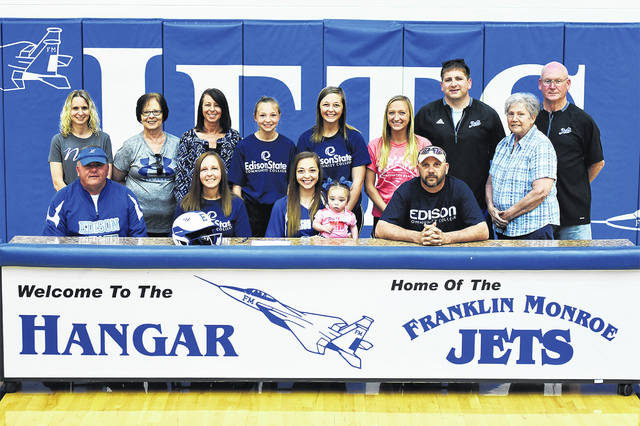 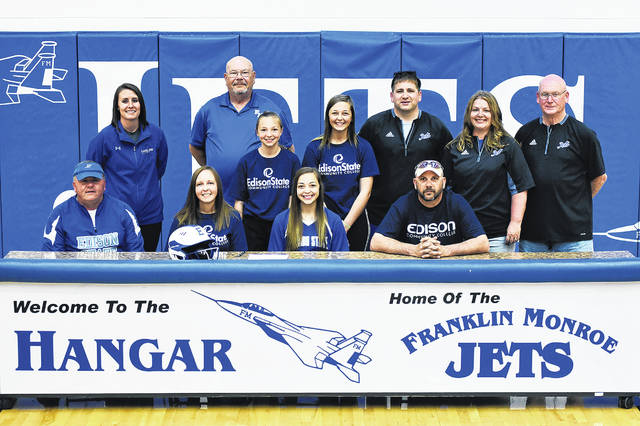 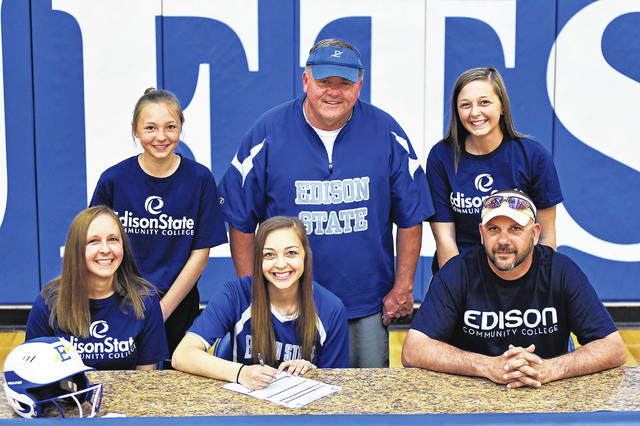 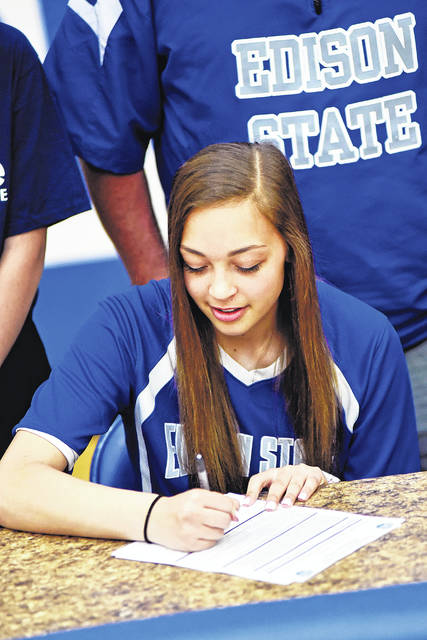 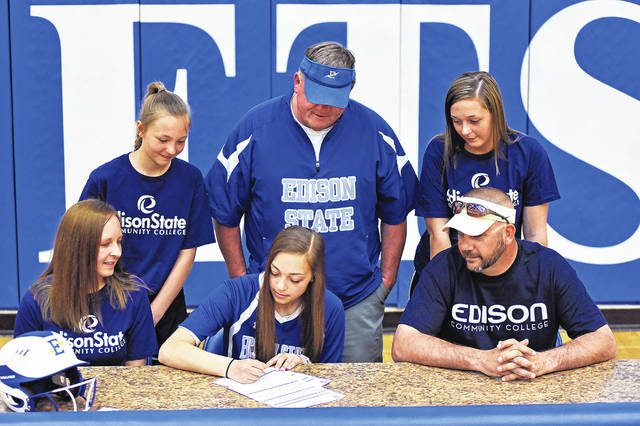 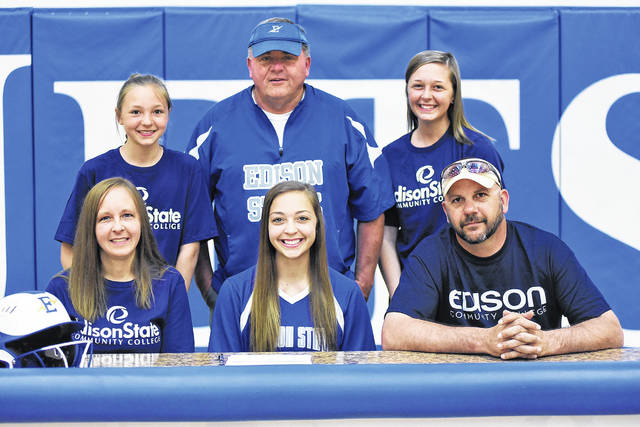 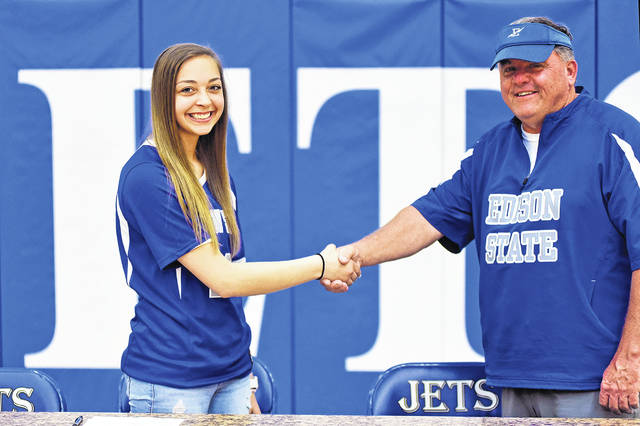 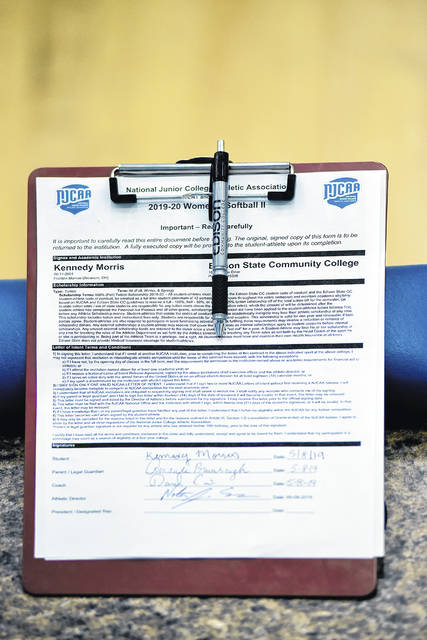