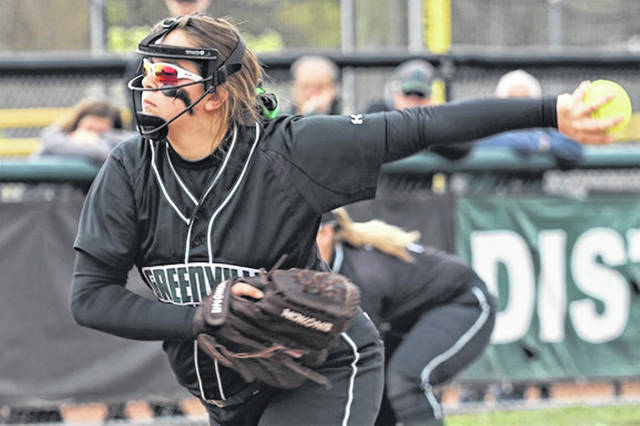 XENIA – The GWOC American North champion Greenville Lady Wave traveled to Xenia for a Wednesday night matchup up with the GWOC American South champion Xenia Lady Buccaneers and came away with a 9-1 victory to stay perfect with a 15-0 mark in the conference.

Morgan Gilbert led off the top of the first with a double to center and moved to third on a Lani Shilt single to center putting runners on the corners with no outs.

Gilbert raced home on a passed ball to give the Greenville team a 1-0 lead with the home team coming to the plate in the bottom of the inning to go down in order with Kennedy Fashner on the mound for the Lady Wave.

Greenville freshman first baseman, Susi Blocher crushed a second inning leadoff homerun over the centerfield fence to give the Lady Wave a 2-0 where the score would stand after two complete.

The Lady Wave plated a single run in the top of the third with Gilbert reaching first and hustling to second on a Xenia error, moved to third on a Shilt fly to center and scored on a Fashner ground out to first giving Greenville a 3-0 lead with three innings in the book.

The Lady Buccaneers scored a run in the bottom of the fourth to make it a 3-1 Greenville advantage with the Lady Wave coming to the plate in the top of the fifth to score four runs and stretch their lead to 7-1.

Gilbert opened the fifth with a single to center and advanced to third on the same play by way of a Xenia error. Shilt followed with a run scoring double. Fashner reached first by way of a hit batsman and Haleigh Mayo-Behnken legged out a bunt single to load the bases with no outs.

Davidson drilled a two run single to left bringing a Lady Buccaneers pitching change with Greenville up 6-1. Mayo-Behnken plated the final run of the inning scoring on a passed ball to give the Lady Wave a 7-1 lead.

Gilbert led off the top of the sixth taking first by way of a hit batsman and immediately swiped second and moved to third on a Shilt infield single.

Next up, Fashner drilled a two run single to center scoring Gilbert and Shilt to give the Lady Wave a 9-1 lead that would hold for the final score of the night.

With Fashner’s night’s work done on the mound, Coach Newland went to Grace Shaffer to shut down the Lady Buccaneers 1-2-3 in both innings six and seven to earn yet another GWOC victory.

Kennedy Fashner went 1-3 while driving in 3-RBIs. Natea Davidson was 1-4 with 2-RBIs, Haleigh Mayo-Behnken 1-4 with a run scored and Baylee Petry went 1-2 on the night.

Fashner picked up the win tossing 5.0 innings, allowing 1-run on three hits while striking out four and walking none.

Shaffer earned the save pitching two innings of no-hit shutout ball, allowing no runners to reach base while striking out four and allowing no walks.

“Excited for the week,” Newland concluded.

With the win, the state’s OHSAA fourth ranked Division II Lady Wave improve to 21-3 on the season.