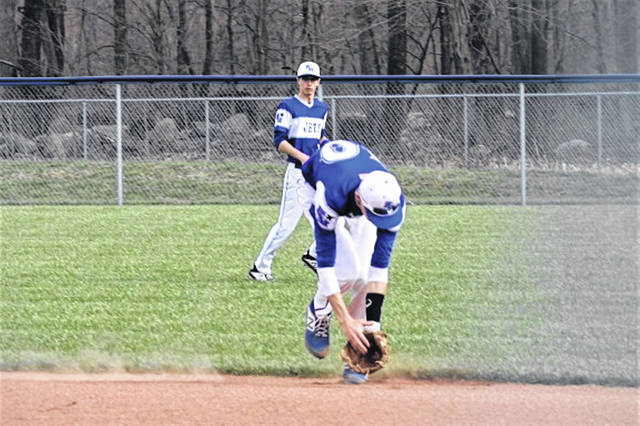 “Over the course of the 10 innings we had 10 hits, mostly in the last three innings,” said Franklin Monroe coach Tyler Rhodus. “We had a game plan at the plate and I thought we had some really good at-bats, just didn’t always get the results we wanted. Emmanuel Christian’s starter, a lefty did a really nice job of holding runners and we weren’t able to run like we like. We struggled to bunt and move runners which resulted in us leaving nine or 10 runners on base.”

The pitcher’s duel had Hosler striking out nine Lions while the Emmanuel pitching was striking out 10 Franklin Monroe batters on the night.

“Brendan Hosler toed the rubber tonight and was incredibly efficient on the mound,” Rhodus said. “He only needed 91 pitches to throw 10 complete innings. He did a great job of getting ahead of hitters and really kept them off balance with is off speed stuff. Nine of the 10 innings Hosler threw less than 13 pitches.”

“He did a really nice job of taking advantage of EC being super aggressive at the plate by throwing off-speed early in counts and drawing weak contact.”

Caden Goins opened play with a leadoff walk in the bottom of the 10th followed by a walk to Blake Sease putting runners on first and second.

Tim Lawson knocked an infield single to load the bases with no outs bringing Larkin Ressler to the plate to drill a walk off single to left plating Goins with the winning run.

“Larkin Ressler is patient and in a hitters count hits a line drive to left center field for the walk off win 1-0. I am happy for Larkin. He has had to really grow as a hitter this year as we have had him hitting in the three or four spot all year. As we have gotten into the back half of the season I think Larkin and Tim both have started hitting the ball really well in the middle of our lineup.”

“Both those guys are seniors and we really leaned on them tonight,” added Rhodus. “They both made several nice plays at shortstop and third base and both of them came through at the plate when we really needed it.”

Blake Sease led Franklin Monroe going 3-4 and a walk. Larkin Ressler was 2-5 with a walk and a RBI, Gabe Sargent went 2-4, Tim Lawson was 1-3 with two walks and Dalton Goubeaus and Jarin Young each went 1-4.

Emmanuel Christian played error free ball while FM was tagged with one error on the night.

“Defensively we were very solid, making all the routine plays and two really tough plays that kept Emmanuel Christian from ever threatening to score,” noted Rhodus. “Caden Goins made a really tough catch in Left field that saved a runner from going first to third with only one out.”

“In the 10th inning, Emmanuel Christian gets their third base runner of the game via a HBP,” Rhodus said. “The very next pitch EC bunts the ball and Hosler fields the bunt and throws out the runner going to first and Dalton Goubeaux (our 1st baseman) throws a strike to Ressler who rotated to third base to double off the runner trying to advance to third. All in all I was very proud of our guys for their defensive efforts tonight.”

Hosler pitched 10 strong innings of one hit shutout ball striking out nine, walking one while throwing a total of 91 pitches on the night.

“I told Hosler that tonight was a first for me by allowing a pitcher to throw so many innings but his pitches and innings were low stress,” Rhodus stated. “I would imagine tonight is definitely a night to remember for him due to the rarity of being able to throw a complete game in extra innings. I would rank tonight’s outing near the top, if not at the top of the best I have ever been part of.”

“I was a little worried about how we would come out and play in a tournament game with nine of our 14 guys playing in their first tournament game,” concluded Rhodus. “As we got going, I thought they all did a great job of not getting overwhelmed and just playing the way we have all year. I am probably most impressed with how our guys handled the tournament atmosphere. All 14 guys embraced their roles and end of the day, it resulted in win giving us the opportunity to play in the second round of Sectionals. Tonight’s win improves our overall record to 14-11.”