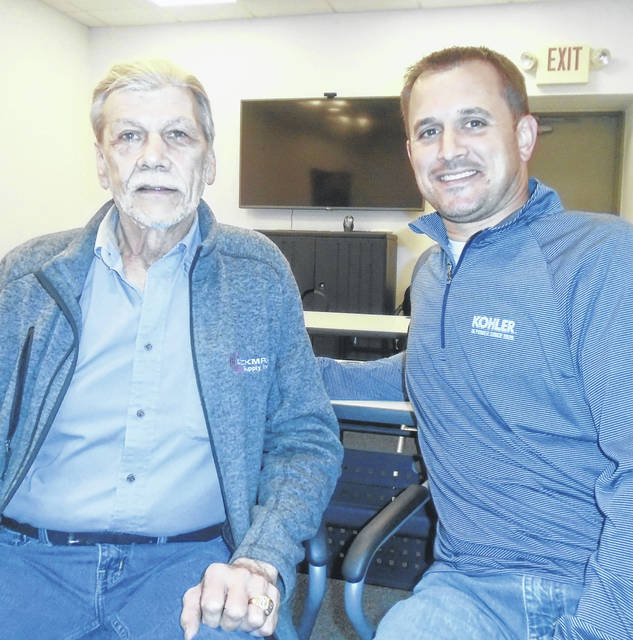 GREENVILLE – Phil Shiverdecker is planning on retiring May 31 from Dickman Electrical and Industrial Supplies on Sater Street – after 50 years of service.

A 1969 graduate of Ansonia High School, Shiverdecker said he went to night school for a short time, but spent most of his time working.”

“I didn’t apply for this job,” he said . “Claire Lynch (his business teacher at Ansonia) set up an appointment with me to go to Stolle’s in Sidney, but the night before, she called and said her husband, Chuck wanted wanted me at Lynch Supply, which was in Union City, Ohio.”

Lynch Supply, it was noted, was sold out to Dickman Supply, in 1986.

Shiverdecker, the son of the late Thurman and Imogene (Seward) Shiverdecker of Woodington, enjoys watching TV, movies and working on the computer.

A resident of Greenville, he said he has enjoyed working with the people he has worked with as well as the many customers he’s met over the last five decades.

Shiverdecker has never missed much work and could possibly be considered a workaholic.

Not only has he worked at the same company, but he has also found work elsewhere while working t the store. He worked third shift for a year at Westinghouse in Union City before it moved to Mexico.

“I would get off at Westinghouse at 7 and be here at 7:30 or 8 to work and get off at 5, clean up and lay down a couple of hours,” recalled Shiverdecker, who also did some bartending at the Whistle Stop and American Legion, both in Ansonia, for awhile.

Shiverdecker, who will mark his 68th birthday on July 17, said he got his work ethic from his father.

“Dad never missed work at Hobart Manufacturing, where the Bistro is today,” he said. “ He worked there and retired from there after 39 years.”

“Phil will be dearly missed,” Holzapfel said. “He will come back in here to see us, but we won’t put him to work. We’ve had our current computer system for 20 years and the days he leaves we are getting a new computer system.”