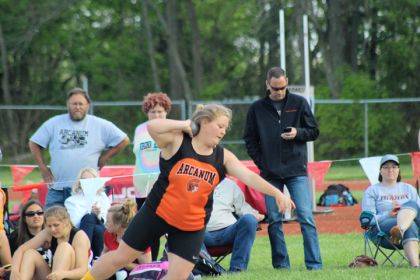 DARKE COUNTY – After the first night of OHSAA track and field district meets, a few Darke County athletes have punched their ticket to the regional meet next week. Darke County athletes competed at various sites, including Piqua and West Milton for division III athletes and Troy for division I. Division III (Ansonia, Bradford, Tri-Village, Arcanum and Franklin Monroe) competed on Tuesday and Division I (Greenville) competed on Wednesday. Division II (Versailles) competed on Thursday, but results weren’t available at press time.

Division III athletes earning an opportunity to compete in the regional meet are:

Morgan Best, of Arcanum, won the District Girls Shot Put title with a throw of 37’ 2.5” and her teammate Trista Hollinger moved on with a fourth place finish and a throw of 31’ 10.5”.

Tri-Village’s Maria Petry advanced to regionals with her third place finish at a leap of 5’ 1” in Girls High Jump.

Jacob McQuinn, of Bradford, won a District Boys Discus title and moved on with a throw of 146’ 4”.

The following athletes will compete in the district finals on Saturday:

Shellhaas, of Ansonia, has the second seed in the 110m hurdles.

Cierra Rosinski, of Ansonia, finished seventh in the 100m dash.

Logan Warner, of Ansonia, advanced to the finals in the Boys 400m Dash after finishing sixth.

Maria Troutwine, of Ansonia, finished sixth in the Girls 300m Hurdles and will compete in the finals.

Bradford’s Tori Derstine picked up the 16th spot in a field of 16 for the Girls 800m Run final.

Jackson Moore will compete in the Boys 800m Run final after finishing ninth in the preliminary run.

Aidan O’Brien, of Arcanum, finished fifth in the preliminaries of the Girls 100m Hurdles to advance.

Tristen O’Brien, of Arcanum, earned a spot in the Boys 110m Hurdles finals with an eighth place finish.

Tri-Village’s Maggie Phillips will compete in the Girls 100m Dash finals after her seventh place finish.

Nicole Brocious, of Franklin Monroe, finished 10th in the Girls 1600m Run to advance to finals.

Austin Bruner, of Tri-Village, will be the lone Darke County athlete in the Boys 400m Dash final on Saturday after his fifth place finish.

Aidan O’Brien, of Arcanum, had a third place finish in the 300m Hurdles to advance to the finals.

Tri-Village’s Harley Ketring had the top time in the Boys 800m Run preliminary to advance to the finals. He will be joined by Griffin Cates, of Arcanum, who finished seventh.

Austin Bruner, of Tri-Village, qualified for his third finals event by posting the top time in the Boys 200m Dash.

Arcanum took sixth in the Girls 1600m Relay and advanced to finals. The team includes O’Brien, Weaver, Wright and Shroyer.

The Arcanum boys advanced with a fifth place run in the 1600m Relay.

In the division I district qualifier, Greenville had three athletes earn a trip to the regional meet after the first day of competition.

Emma Klosterman took the district championship in high jump with a leap of 5’ 2”.

Harley West had big throw in shot put to finish fourth and move on. Her throw reached 36’ 1”.

Ian Riffell finished second on Boys Pole Vault with a vault of 12’ 10”.

The following Greenville athletes will compete in finals of their events on Saturday:

Foster Cole finished eighth in the Boys 110m Hurdles to advance to finals.

The Boys 800m Relay team of Boltin, Thomas, Stevens, Shilt, and Watson took the last spot in the field of eight.