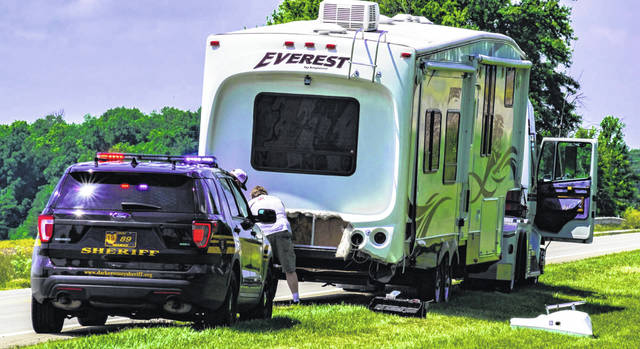 ARCANUM — Minor injuries were reported Thursday afternoon following a two-vehicle accident on the outskirts of Arcanum.

At approximately 1:43 p.m., emergency personnel from Arcanum Fire and Rescue along with deputies from the Darke County Sheriff’s Department were dispatched to the intersection of State Route 49 South and Hollansburg-Sampson Road in regards to a two-vehicle minor injury accident.

According to the Darke County Sherrif’s Department, a preliminary investigation into the accident has revealed that a tan 2003 Buick Century, driven by 84-year-old Louise Sando of Arcanum, was traveling westbound on Hollansburg- Sampson Road when she stopped at the stop sign located at the intersection of Hollansburg-Sampson Road and State Route 49. Sando failed to notice oncoming traffic and pulled into the roadway striking an Everest fifth-wheel travel trailer being pulled by a northbound white 1996 Freightliner, driven by 53-year-old Christopher Clark of Liberty, Ky.

Sando was treated on the scene for minor injuries by Arcanum Rescue before refusing any further treatment and transport to a medical facility. Clark, as well as his front seat passenger, were uninjured in the accident.