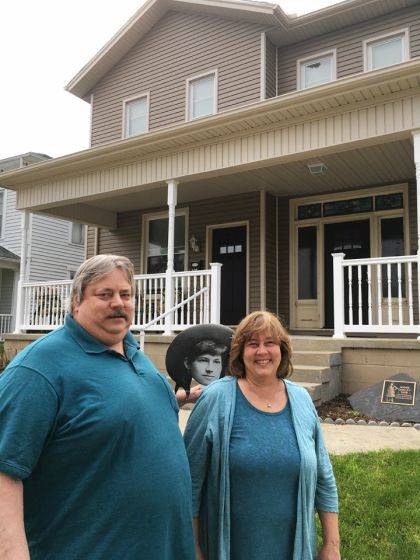 GREENVILLE – Mike and Sherri Jones are being recognized as this year’s Annie’s Star-Spangled Gala Honorees for the renovation of the property at 227 East Third Street, which was known as the Brodrick & Zemer Boarding House. It is here that Annie Oakley died, and the Joneses have established a stone marker at the site noting its historical significance. The structure has been brought back to its original glory, and there is supporting documentation from the doctor who cared for Annie Oakley in her last days as to where her bedroom was in the house. Mike became frustrated when the tour bus during the Annie Oakley Festival would come by the dilapidated house and talk about its history. His thinking was that this should not be the last thing that people who come to Greenville should see.

The Brodrick & Zemer Boarding House is only one in a number of notable structures the Joneses have renovated. In fact, the Joneses have renovated numerous properties in Greenville to date. This passion for preservation unfortunately that started when Mike was home on leave from the Army and learned that the State Theater, formerly the old opera house, had been torn down. It was magnificent with its three-story stage, five dressing rooms, orchestra pit, and two floors of apartments for the performers. He felt that “someone should have bought it, put money into it, and saved it…for the future. It was such a loss.” This became his mission—home by home.

The Joneses’ commitment to community preservation can be seen in the glorious St. Clair Manor, which was built as a home for women by Arthur St. Clair. It too had been saved from the wrecking ball and boasts 100 new windows, insulation, a repaired slate roof, new plaster and paint, sanded hardwood floors, and a quaint porch and car port surrounded with beautiful landscaping. During the renovation, workers were able to save the beautiful 8’ x 9’ built-in cabinet that defines the dining room. This is truly a wonderful venue to host any special occasion.

Just around the corner is the Craig House (also known to some as the Fry House) at 202 East Main Street, which is at the corner of Main and Walnut Streets. The building patent (now known as a permit) was taken out in the 1820s by James Craig, who built the first of the county’s two courthouses. The house has pinned hand-hewn floor joists and ceiling joists, not to mention the five hearths in the basement that were used for baking. This is definitely a beautiful memorial to the skilled craftsmen of yesteryear.

Not far down the street is the residence at 307 East Main Street uniquely identifiable by its wrap-around front porch with a quintessential sunroom on the east side of the sprawling veranda. Nearly destroyed by water, the 1861 home was saved and catches the eye of drivers daily.

These century-old homes are distinctive and have a special place in the City of Greenville.