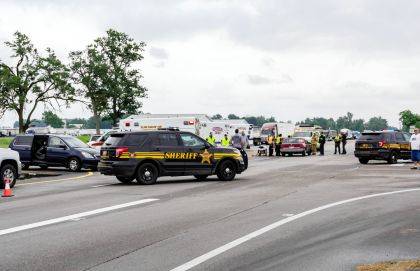 GREENVILLE – Minor injuries were reported in a Monday morning accident on the outskirts of Greenville. At approximately 10:11 a.m., Emergency personnel from New Madison Fire, Tri-Village and Greenville Township Rescue, as well as deputies from the Darke County Sheriff’s Department, were dispatched to the intersection of U.S. Route 127 and U.S. Route 36 West in regards to a two-vehicle accident with injuries.

According to the Darke County Sheriff’s Department, a preliminary investigation into the accident revealed a blue 2007 Honda Odyssey, driven by 27-year-old Katherine Coffman of Greenville, was traveling eastbound on U.S. Route 36 west when she stopped at the stop sign located at the intersection of U.S. Route 36 and U.S. Route 127. Ms. Coffman attempted to make a left-hand turn onto U.S. Route 127 when she failed to notice and pulled into the pathway of oncoming traffic. A red Oldsmobile Royale, driven by 62-year-old Randall Liette of Greenville, was traveling southbound on U.S. Route 127 when the vehicle he was operating struck the Coffman Honda.