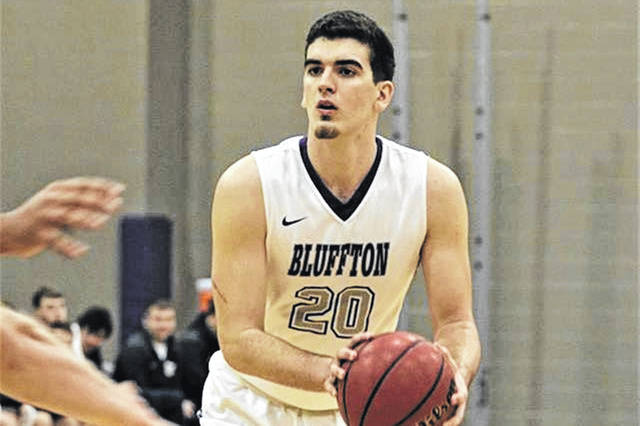 BLUFFTON – Aaron Rich, a 2017 Greenville graduate has been name a Captain for the Bluffton University Beavers men’s basketball team for the 2019-2020 season.

“It’s a great honor for Aaron,” said GHS athletic director and Rich’s former high school football coach, Aaron Shaffer. “It’s a huge responsibility to be a captain at any level but it’s even more so when you get up to the collegiate level. We are obviously proud of everything that he’s doing for him to be selected as captain. It’s just quite an honor and we’re really excited and proud of Aaron.”

“Aaron being named a team captain as a junior really shows who he is as a person, teammate and player,” said Rich’s high school basketball coach, Kyle Joseph.

“We have a team vote at the end of the year and this year we picked three Captains,” said Rich, “another junior and me and a senior that was a captain last year.”

“It is a big honor,” Rich said. “Coach (Guy) Neal takes it very serious. He really looks up to the captains and works alongside us. He ask us to do a lot and it’s a big responsibility. It takes the right person and it is a really big honor – even as a junior it shows my teammates respect me and they think I can get the job done.”

Rich earned a starting position for the Beavers his freshman season, the team’s lone freshman starter.

“Aaron persevered through some pretty tough times in high school,” Shaffer noted. “He’s had some life experiences that many other kids haven’t been through. Those sort of things help you to develop a maturity and leadership that maybe other kids don’t get. He was a great kid to work with here. It was always awesome to have him around.”

Rich accounted for 42 assists, 19 blocks and 16 steals to lead the Beavers to an 18-9 season record his sophomore season.

“Our coaches, our community, our teachers and our schools do a good job of preparing kids when they leave Greenville to go be leaders outside of Greenville,” stated Shaffer. “It is definitely a neat thing for Greenville High School, Greenville City Schools and the Greenville athletic department to have one of our guys go out and be a leader at the collegiate level for his team – obviously a great thing.”

The role of a captain at the college level carries multiple responsibilities.

“Communicating with the team, what the team needs are, how the team is looking, what’s the moral of the team, talking to Coach Neal and how he wants to do things, how he sees things,” noted Rich of his new duties. “Just balancing that and the team because sometimes in college there is a different perspective and it’s good to have somebody, the middleman to talk between the coaches and the team.”

Rich understands the time commitment that comes with the role of team captain and is up to the challenge.

“College basketball is like an everyday job so you have to make the most of it,” added Rich. “I enjoy doing it – I know I can make it work.”

“We talk a lot about the things he can do to elevate his game and improve his team,” Coach Joseph stated. “I know he will go above and beyond to fulfill his duty to his teammates, coaches and community.”

“Aaron has done a lot of great things though his athletic career on the court and on the field,” concluded Shaffer. “He’s one of those kids you can count on to be there to help and do the right thing.”